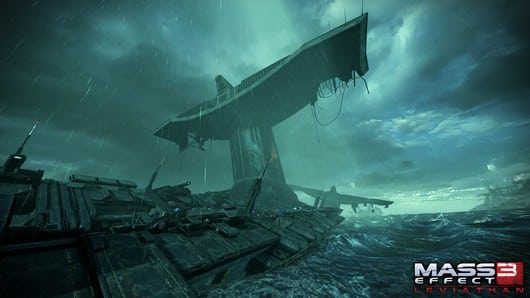 Mass Effect Leviathan is the latest DLC from Bioware.

Remember Mass Effect 3?  After free multiplayer DLC and the extended cut, Bioware brings us its first playable single player DLC. The Systems Alliance has found something that might change the course of the war and once again Shepard is on point to find and secure this asset to win the war.

This DLC adds to the story by expanding the single player campaign. The 2-3 hour DLC, also comes with new upgrades to your arsenal and an extra war asset, but otherwise doesn’t really affect the other aspects of the game.

There are emotional choices and a few nods to the previous game’s lore. There are also puzzles and Atlas Mech sections in addition to the normal run and gun. The maps are designed with more layers to make it feel more flexible and to make the locations feel more realistic. Despite new characters, new locales, raised stakes and more reapers to shoot at, the DLC still feels unsatisfying. The attachments feel underwhelming; the puzzles are just a question of “Have you found all the interactive spots in the map?” and because the ending of the DLC makes such a huge splash, the fact that it doesn’t do anything after that is disappointing,

I should say that I am judging this harshly as I expect a lot from anything Mass Effect. Bottom line is: if you are dying for more Mass Effect then this is a solid and fun DLC with new places to go, new things to see and hear, and more choices to make in the boots of Commander Shepard.