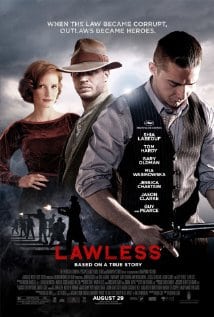 Much like director John Hillcoat’s last film The Road, Lawless is a story of families surviving. Now its Prohibition era America rather than the apocalypse and The Road’s father and son have become three intensely loyal Bondurant brothers. Lawless, however, is a far less unrelenting film than The Road and suffers for it. Ultimately, it’s solid direction and gripping story (with a charmingly authentic screenplay by long time Hillcoat collaborator Nick Cave) redeem it from being a missed opportunity but it certainly lacks the bite of Hillcoat’s previous work.

Forrest (Tom Hardy), Howard (Jason Clarke), and Jack (Shia LaBeouf) make moonshine  and defend their profession with brutal ferocity. Jack dreams of bigger things, fancy cars and expensive suits much to the annoyance of his two older siblings. Early on they give local sheriffs a few jars of their finest product so that they’ll look the other way. That is until Special Agent Charlie Rakes (played with a constant, menacing sneer by Guy Pearce) arrives from Chicago to put an end to their business and, potentially, their lives. The film really goes out of its way to establish just how evil the foppish Rakes is. Pearce is clearly trying his best to be anything less than completely obvious but his efforts get lost amidst the noise of scenes which serve no purpose other than to make sure you know what a villain he is when the issue was never in much doubt to begin with.

For all the subtlety that Rakes lacks, it can be found in droves in Hardy’s Forrest, who may well be one of the characters of the year. Much like in the excellent Bronson, Hardy plays a man capable of extreme violence, but Forrest is not the crazed sadist that Bronson was. His violence is never for show and is always done purposefully: to protect himself and those around him.  He is a man of closeted emotions, so much so that when new arrival Maggie Beauford (Jessica Chastain) begins to show signs of affection, Forrest reacts with a schoolboy shyness which makes him so much more than just another violent thug.

In the end, Forrest shines so brightly that he drowns the rest of the film out. The Road managed to arrange all of its parts into a far greater whole but Lawless has to content itself with being a film of impressive surface but little substance.