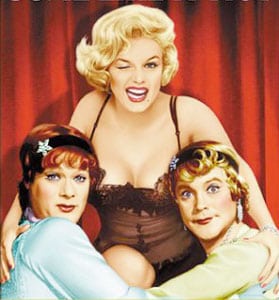 Yes, it may be an unadulterated guilty pleasure, but this take on Shakespeare’s Twelfth Night features Amanda Bynes at her finest. In a bid to impress her ex-boyfriend she wins a place on the “soccer” team as her “brother” and uses a tampon for a nosebleed along the way.

Disney’s Chinese heroine takes on the whole Hun army, all whilst dressed as a man. Despite earning the respect of the whole barracks as a soldier, her happy ending, in true Disney style, inevitably arrives when she finds love as a woman, with a really fit guy.

Women couldn’t act on the stage in Shakespeare’s day, leading to Gwyneth Paltrow dressing up as a man dressing up to play a girl and then falling in love with young Willy!  Piling up awards for British film, it also led to Paltrow’s slightly awkward Oscar meltdown.

A family classic, Robin Williams’ hilarious performance is still poignantly impassioned for father’s rights. Full of quotable lines (“oooh! it was a drive-by fruiting!”) this film warms the cockles like no other. The prosthetics alone keep this film high up the list.

Two witnesses to a mafia murder, Daphne and Josephine are two men on the run. Bumping into an alcoholic but sexy Marilyn Monroe on the way, they go undercover in an all-female band. This old style comedy is still as “fresh!” and is to be watched for the last line alone