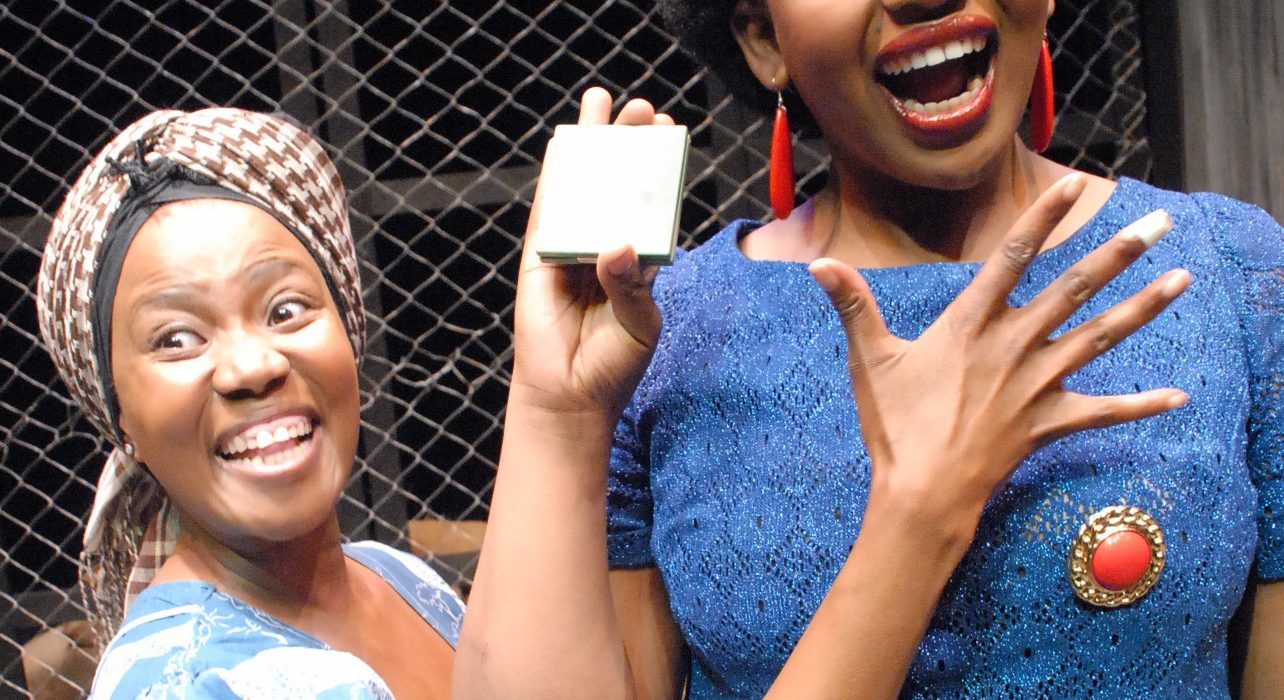 Lesego Motsepe and Hlengiwe Lushaba in 'And the girls in their Sunday dresses'. Photo: Eric Miller

And the girls in their successful dresses

If you are looking for culture, colour and creativity without leaving Manchester, ‘And the Girls in their Sunday Dresses’ is the play for you. Directed by Princess Mhlongo, it brings the inspirational story of two African women who meet in a queue, waiting days for rice. The two South African Award winning comedians Lesego Motespe playing a strong minded domestic housekeeper and Hlengiwe Lushaba playing a retired prostitute, emotionally touch, yet constantly tickle the audience. They uncover and explore the struggles of being black subordinated females in a country where the desire for equality is also essentially a waiting game. I’ve never seen such an engaging two man (or should I say two women) play that successfully kept me entertained from start to finish, with their edgy yet powerful performances.

At first, I did wonder why the stage only consisted of a chair and some gates, but it was soon apparent that no fancy stage design was needed with the immense raw talent that filled the room. I felt Lushaba really knew how to engage with the audience, from start to finish. Not only could she project and powerfully hit the audience with her scripted lines, but her improvisational skills were exceptional, especially her cheeky hilarious behaviour to certain members of the audience. I do think audience participation can sometimes be a bit ‘pantomime-esque’, but here it just brought a new dimension of energy to the performance. Clearly, the actresses had the ability to light up the room with laughter, but also make us feel sensitive and serious towards the characters when appropriate. Their emotions seem to feed the audience who constantly craved more, just like the women yearned for their rice.

Cleverly, the performance transitioned from reality to the women’s imaginations. From gospel singing in churches to advertising make up, these snippets did elevate the whole room, taking us on an adventure to the streets of Africa and back. It broke up the characters’ tedious four day queue, giving the play movement. Ironically they were still waiting for rice. It was truly amazing how this technique gave flexibility and even more vivacity to the drama.

Behind the laughter, political messages are ‘simmering’ with regard to black, poor women being tied down to the shackles of African society. These messages are clearly voiced throughout the play, leaving the audience pondering over how much we take for granted in an egalitarian society.

Nevertheless, the actresses did not leave me feeling down, but left the audience on an empowered and liberated note. It will make me think twice about complaining about the queues in Fallowfield’s Sainsbury’s as I will always remember ‘And the Girls in Their Sunday Dresses’. The show is part of the ‘Afro Vibes’ festival, and after seeing this great piece of drama, I would not hesitate to watch any of the other performances. If you want a hilarious yet thought provoking watch that will take you on an inspirational journey, put on your Sunday dress and watch raw talent take its toll.