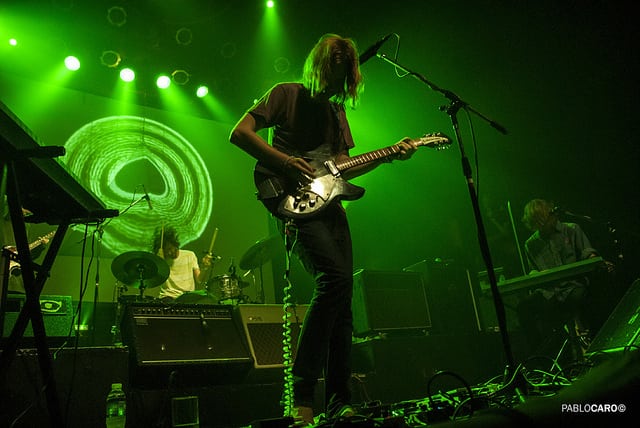 On a mercilessly cold Mancunian evening, the Ritz played host to Australia’s proud sons of the stage – the psychedelic quartet, Tame Impala. The band has enjoyed unbridled success since their formation in 2008, rising to international acclaim after the release of their debut album, Innerspeaker – they have not looked back since. Tame Impala can be described as riding on the crest of a wave, which is understandable given that this current tour coincides with the release of their second album, Lonerism. Prior to the album’s much anticipated release, fans were offered a tantalising taster of what to expect with the release of the single ‘Elephant’. In the milieu of hyped-up expectation, it goes without saying that the Ritz enjoyed a full house, consisting of young and old alike.

But the responsibility of warming up the crowd (and boy, did we need it!) was left to a Norwegian, glockenspiel-sporting, dream-pop collective, aptly named Young Dreams. The band, eased the crowd with a toe-tapping performance, the combination of their rustic and intricate instrumentals being somewhat reminiscent of Fleet Foxes. But regardless of the upstarts’ impressive display, it was to be Tame Impala’s night.

One can be forgiven for assuming they was in the band’s hometown of Perth as they walked out barefooted across the stage, clothed in little more than attire suited for the beach than for a Mancunian winter, donning oversized t-shirts and frayed denims. Opening with ‘Be Above It’ off the latest album, it proved to be a wise choice as it eased the crowd in gently before erupting into ‘Solitude Is Bliss’, providing enough incentive for the first crowd surfers to be seen overhead. From here, they slip into an astounding display of a psychedelic free-for-all, peppered with the driving drum beats of Julian Barbagello and the heavy bass lines of Nick ‘Paisley Adams’ Allbrook. After a lengthy instrumental, the opening to ‘It’s Not Meant to Be’ captures the audience, but this comfort blanket is swiped away and is replaced with the lesser known ‘Music to Walk Home By’.

“Go wild to this next one if you know the words!” Kevin Parker, lead vocals, tells the audience. Half muttered suspicions of Elephant were correct, and this crowd pleaser has the entire audience thrashing around. ‘Feels Like We Only Go Backwards’ and an Innerspeaker favourite ‘Lucidity’ quickly follow, before returning to the latest album offerings of ‘Alter Ego’ and ‘Mind Mischief’.

All the while, the visuals presented on the screen behind the band show a pulsating green dot that develops into an eye, complete with pupil and iris. Forgive this fan, but the promise of Tame’s reputation for providing stimulating visuals was alluring, and this particular display was ultimately an anti-climax.

Those not deterred by the visual display were euphoric, prompting dad dancing among the older generations and a number of girls on shoulders among the audience. The band was now clearly in high spirits as they effortlessly jam their way through ‘Why Won’t You Make Up Your Mind?’ and ‘Desire Be Desire Go’, but it is ‘Apocalypse Dreams’ that is chosen to close the set. For their triumphant encore, synth player Jay returns to the stage first and throws sweets out into the crowd, cheekily adding “taste the rainbow!” after asking “who wants skittles?”. ‘Half Full Glass of Wine’ is chosen as the concluding song and whilst Kevin is swigging at his beer, the band improvise, with the heartbeat bass line filling the void until he regains control of the mic to close the gig and what was, for an hour and a half, an altered state of consciousness.