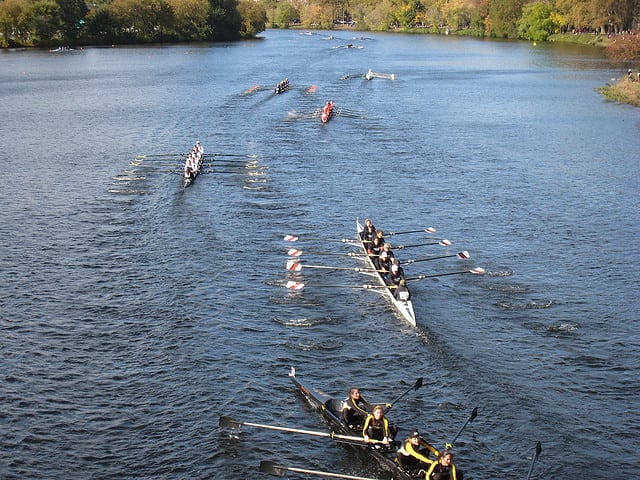 On a drizzly Saturday morning, members of the Manchester University Boat Club took to the famous waters of Tideway on the Thames for the annual Head of the River Fours race.

A field of 500 boats, including participants from all over the UK as well as a splash of Dutch and German competitors, set out from Mortlake along the 6.8 kilometre course towards the finish line at Putney Bridge; a reverse of the route used each year for the world-famous Oxford and Cambridge boat race.

The boats present were made up of three different rowing categories, all of them racing simultaneously; the quads (four men, two blades, no cox), the coxed fours (four men, one blade each, with a cox) and the coxless fours.

This year’s race marks the first time for many years that our university has entered a team of quads, and they commemorated the occasion by finishing as the best of the Manchester bunch.

Last year’s event saw the coxed fours of UoM stroke home to a very respectable 160th finish, and topping that was marked as top of the agenda.

While this was not accomplished by the first of the coxed fours teams, who placed 188th, this was to be a day reserved for the quads, who snuck into the top 100 on debut.

Upon hearing the results, club president Simon Moss said he was very happy with the performance, although as a perennial hard-man-to-please, he conceded that the team “could have done much better”, adding “the quads certainly felt they had an unlucky race, and were hoping for a top 70 spot as a minimum”.

Moss, who is currently out of action due to shoulder injury, admitted he was “gutted” to have not competed himself, but is looking at the results from the Fours Head as a strong stepping stone for the rest of season.

The rowers will next perform nationally when they look to defend their crowns in Chester at next month’s BUCS Indoor Competition.

This year’s Fours Head event was ultimately won by Henley-based rowing club Leander for the second consecutive year, though the bragging rights of best finish of any University rowing team was the Oxford University coxed four, who placed seventh.