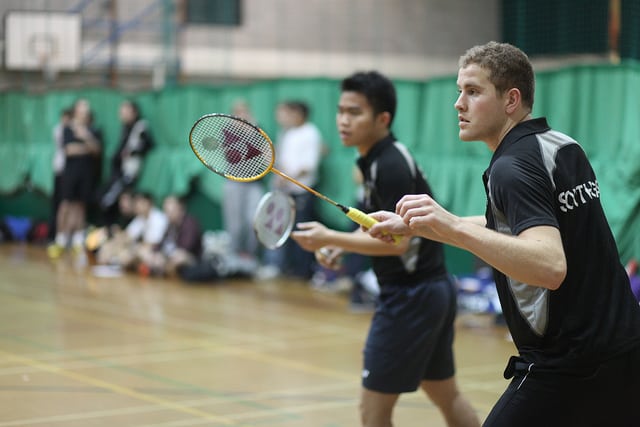 Manchester are still looking for their first points in a tough Premier Division. Photo: Mancunion

In an engaging contest at the Armitage Centre, Manchester were unable to prevent league leaders Loughborough from continuing their winning run, as the home side still search for their first points of the season.

The contest began with the first round of doubles games; Manchester’s James Kee and Nick Ardern faced Loughborough’s Martin Drabble and Ryan McCarthy, while Adam Southgate and Luiz Teh took on James Watkins and Rob Golding. Kee and Ardern battled hard during the first set, and were perhaps unfortunate to find themselves behind at its close. They rallied in the second, claiming a close victory to tie the score at one set each, but the powerful combination of Drabble and McCarthy proved too much in the deciding set, as Loughborough claimed the first point of the contest. On the next court, Southgate and Teh had spells of excellent play, but these were too few and far between as their opponents Golding and Watkins took control to win in straight sets.

With the score at 2-0 to Loughborough, Manchester looked to their singles competitors Ben Dolman and Andrei Donko to turn the tide, as they took to the court against Miles Milner and Aaron Cheng respectively. Dolman claimed the first win for the home side, thoroughly dominating his opponent Milner in a straight set victory. However, Donko was unable to add to the points tally as despite his best efforts he succumbed to the impressive Cheng.

The doubles pairs returned to action, with Kee and Ardern up first to face Golding and Watkins. The excellent teamwork of Kee and Ardern was evident, as they communicated well and worked for every point. But, much as in their first game, Golding and Watkins proved too strong for their adversaries and claimed a 2-0 win. On the next court, Southgate and Teh were back in action against Drabble and McCarthy, and the Loughborough men defeated their resilient opponents in another straight set victory.

With the scores at 5-1 to Loughborough, the singles players returned to the court simply playing for pride as the win had been sealed by the away side. This did not distil the quality of play as Loughborough’s Cheng, perhaps the best performer on the day, was required to work hard to defeat Dolman, the latter clearly frustrated with his loss. Donko, on the next court, endeavoured to soften the blow of defeat, as he produced his best badminton of the day to beat Miles Milner over three sets.

In the end it was a comfortable 6-2 victory for the renowned visitors, though there was plenty in the hosts’ performance, especially in the singles, to offer hope for the rest of the season.