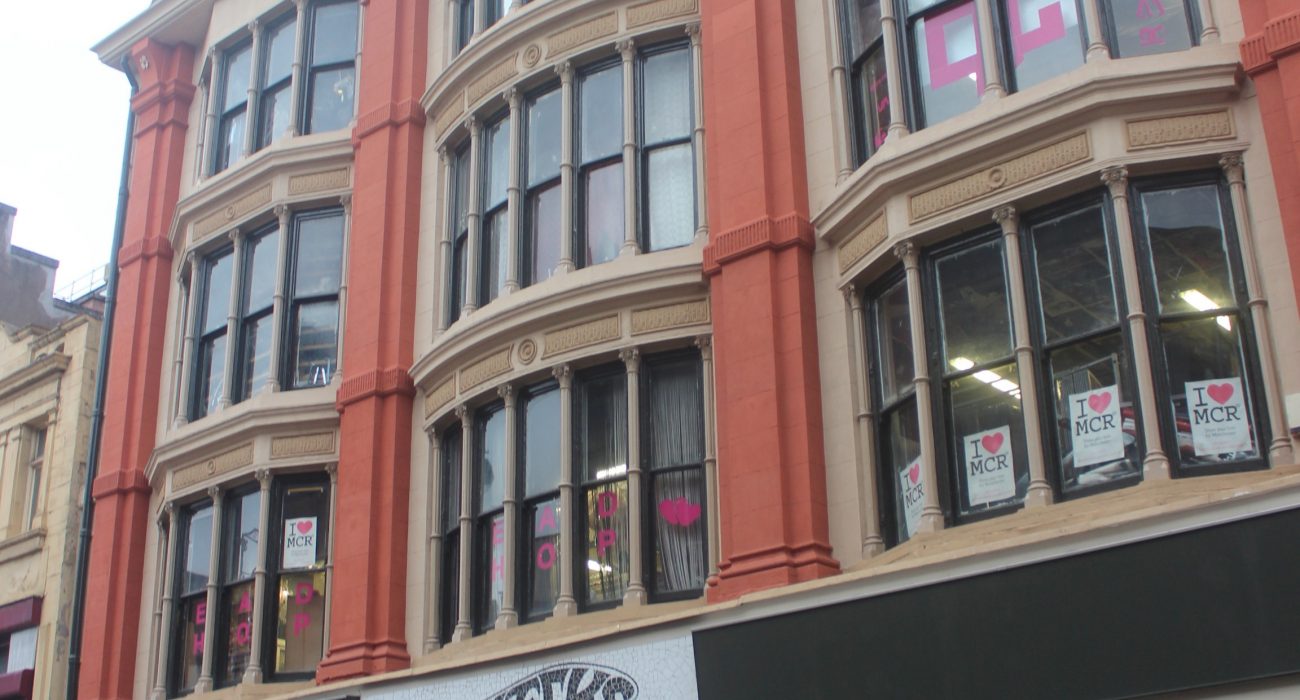 Thriftette is located on the ground floor of Affleck's Palace. Photo: Melissa Malala

Following the typical student lifestyle, we have all undoubtedly spent too much on *insert here* at one point or another, only to spot an amazing addition to our wardrobes, guaranteed to make you stand out from the manic Mancunian crowds. However, you now inevitably simply cannot afford the luxury (not even with that looming overdraft…)

Having started out travelling between Vintage Fairs and fuelled by their dreams, Thriftette’s founders, Lucie Benjamin and Grace Avery, began their own market stall in 2011 and have already managed to open their first shop, which can be found in Affleck’s Palace, in under a year. An astonishing success for a business that has been in existence for such a short period of time, as well as providing a highly inspirational example for anyone out there to take note of.

Having met while at University, the trendy duo realised that they both shared a passion for everything vintage, already with the ability to stand out, and could offer a product and ideas that differ from every other, while still staying bang in vogue. Having studied the fashion industry it was inevitable that these two fashion super-savvies would create something stylish yet equally affordable.

In addition to this, unlike a lot of other stores, the girls effortlessly create an incredibly welcoming, friendly and sociable atmosphere with an eagerness to help their customers, something which I definitely felt when I paid them a visit for an interview. Here is what they said:

Did you always know that you wanted a fashion-orientated job?

We always dreamed about it but never actually believed that it would happen. One night Lucie and I just sat up talking and sharing ideas, then we began doing vintage fairs. It was a good place to start because apart from the clothes, all you really need is a car! We did that for quite a while, but it did start to get boring doing the same thing every weekend and we also found it to be too focused on money-grabbing as they charge stalls to attend, which just seems ironic! When we realised we wanted to open our own store, we each gave an input of £150, so it really can be done. We also model our own products for our online store, as that helps to cut down the cost as well. Although we did have a photo shoot yesterday and the model we got was really good. Of course now we have earned that money back…and more.

Is the fashion industry as stereotypical as people immediately think?

At uni we felt like the losers, it was always just the two of us, we did everything together, lived together. There really was a lot of bitchiness on our course, especially because there were sixty girls! People used to laugh at us or just not really want to get to know us because we were different. I still have some of them on Facebook and it makes me laugh now because a lot of people now, even after they have graduated, work in supermarkets and things like that.

What was the reason you moved back to start a store in Manchester having studied in Leeds?

I [Grace] grew up in Manchester and so I suppose I always knew that I was going to come back after I graduated, and when Lucie and I had the idea that we did want to start our own store, we looked around and found this shop space in Afflecks really quickly. Too good to turn down!

A lot of people would love to do what you have achieved, but worry at the thought of having and managing their own business. Have you had any major setbacks or difficulties on the way?

It’s still really hard to know. We have only been here for eleven months so we do not really have any previous figures to work by. Not that long after we moved here, a lot of customers would come in and ask us where other (vintage) stores were, and when they left we would think, “come and try our stuff!”

We were already established here for the post-Christmas madness in January, and I suppose, for us, we didn’t really know how well we were doing since it was all new to us, any time customers came in and bought something, we thought it was great! There is a lot of trial and error involved. It will be interesting to compare the figures at the end of the year.

Where do you get your clothes from?

Well, we do pretty much all of the design work ourselves. We get a lot of things from Wholesalers and then revamp the products ourselves. My [Lucie] parents also moved to France so I often travel there to the flea markets, they are a great place to find new ideas and I always come back with loads of things. The only thing is, whenever I go to France I get a lot of French people shouting ‘Lady Gaga’ at me (which she pronounced in a perfect French accent). I think it is because people in France must not see people with blonde hair!

How would you describe your style and/or the style of your product?

We definitely create things that we would wear. [They both demonstrate their outfits, which in some cases, can either be identified hanging on the walls or have a very similar look]. We really don’t like it when we see what some models wear on the catwalk and you just know that you would never dream of wearing that on the street, especially since a lot of people do not like to look too different. We are of course also providing for a target audience similar to ourselves. If you come in store you will often see us wearing our own products. The things we sell are one-of-a-kind that you would not find anywhere else. We are very pro self-expressionism and try to inject our own personality into everything we design. I [Grace] wouldn’t say that we ever stick to a particular style rigidly, we always change, it just happens at the moment that we have a bit of a grunge theme. Whatever style it is, we definitely wear it with a purpose, we know why we like that particular look at that particular time, that is something that is really important to us. Lucie often changes her hair too. At uni you’d never know what colour it would be the next time you saw her! I [Grace] am in the process of growing out my blonde and returning to my natural, brown. We don’t even know what we will do next.

On my way to Thriftette this morning it was hard not to notice the vast amount of vintage stores all in such a close vicinity to yourselves. How do you deal with that sort of competition and does it affect your business?

[Grace] I don’t think we have ever noticed it really. I mean we have our own stand-out ideas. For example, as we said all our products are 100% original so you won’t find them in any other of these vintage stores. We also offer T-shirt printing within the store, so that of course is something else that makes us unique. We also have a Loyalty Card system, so you get a stamp every time you buy something, then after five stamps you get £10 to use in store. Oh, and 10% student discount, which, actually a lot of other independent stores will not offer.

So, now that you have made it so far, where do you see yourselves in a couple of years time?

We would like to branch out and maybe develop into a chain store in locations all over the country, but obviously also where there is a good space for fashion. London or Birmingham would be good. And since I [Lucie] am from Essex, maybe that could help to get us going in different places. I’d like to open a store in the South. Developing our online store is also a big issue for us.

What do you both enjoy doing in your free time?

We work in the store an awful lot since it is just the two of us, but on our days off we do a lot of designing, updating our blog and do enjoy guilty pleasures such as TOWIE, oh, and Made In Chelsea.

If you haven’t already, a visit to Thriftette is an absolute must. Not only will you be spoilt for choice in great fashion, you will also get a lovely chat from two very talented young ladies. SOLD!