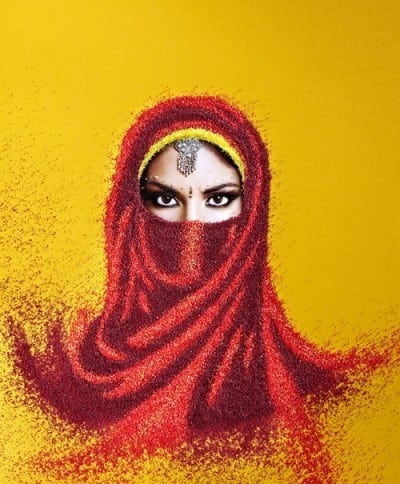 The Library Theatre Company’s annual Christmas show is always a highlight in  Manchester’s theatrical calendar, and this year is set to be no different. Directed by the North’s very own Amy Leach, a regular on the Manchester theatre scene, Arabian Nights is sure to bring a touch of warmth to us all this Christmas.  I met up with Amy and the cast to watch them rehearse, and to find out more.

The story starts after the discovery (and then murder of) King Sharayar’s wife being unfaithful. His anger causes him to seek revenge on all women: he decides to kill each and every virgin women in the land, after he has married them. That is, until he marries cunning Shaharazad, who tells him all but the end of a fantastical story every night for a thousand and one nights until he sees the error of his ways.

Amy Leach tells me what mainly attracted her to the project was the story-telling aspect. She says: ‘I grew up watching and adoring stories being told in the theatres of Manchester and so feel very lucky to be able to tell one of my own’. She also told me of the epic nature of the show: ‘each story could be a play in itself! The play is being staged in-the-round, at the Quays Theatre at the Lowry, an experience that will surely immerse the audience and transport them to a world of medieval Persia, where stories were traded alongside silks and fine spices.  From watching the rehearsals, it is clear that the show will be a non-stop treat for the senses: music playing throughout, lots of movement and colour and lots of character changes and transitions.

And students, don’t be put off by the ‘family element’ to the show. Talking to Amy, I become aware of the darker and more adult ideas in the play, such as the genocide of a whole nation of women, not to mention the sexuality in the play. And if what I saw in the adultery scene is anything to go by, I’d suggest an adult audience would definitely enjoy the show. This is not to say, of course, that the show will not be fun for all the family. Bring your grandma, bring your six year old cousin, bring anyone so long as you don’t miss Arabian Nights. As all of the cast informed me, it’s sure to bring out the kid in all of us!