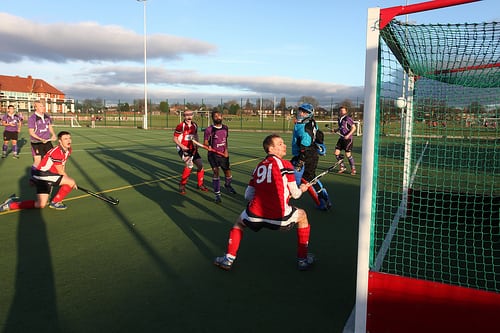 Manchester cup campaign off and running

Manchester edged past Edinburgh in a keenly contested BUCS trophy match on a freezing afternoon at the Armitage Centre. The opening phases of the match looked promising for Manchester, pinning Edinburgh in their third for the opening five minutes with three consecutive penalty corners. They found themselves unlucky not to be ahead, hitting the upright before Plummer forced a save out of Edinburgh keeper Fursdh.

Unfortunately, the nerves that come with a cup game started to show and despite looking defensively stable, keeping possession seemed to become a problem for Manchester with many misplaced passes allowing Edinburgh to impose themselves on the game.

Manchester’s Capper looked strong throughout the first half, often acting the catalyst for his side’s attacking play with splitting passes and tricky runs. Manchester won another penalty corner after a pass of his was adjudged to hit an Edinburgh foot, but the resulting effort was sent wide by Trem. The chances were adding up for Manchester as another went begging; a shot from Jabbal was parried to the feet of Capper who played it across the face of goal, but no-one was there to make the connection.

Two minutes later Edinburgh delivered a blow to Manchester as Edwards scored from a Jameson lay-up following only their second penalty corner of the game.

Manchester were clearly shaken by the goal and only moments later Edinburgh were back through on goal and only fine goal-tending from Richmond forced the Edinburgh striker to put the shot wide. Edinburgh played out  most of the last ten minutes of the half in impressive fashion, particularly through strong runs from Kock and a testing long shot from Scwarerick that was only inches wide.

However, in the final moments of the first half Manchester picked themselves up for a final push with a shot that went wide before receiving a penalty corner. The corner was played in by Clemenson and after a melee in the area a shot was taken by captain Clements, took a bobbling deflection before being well finished by Jabbal, making the half time score 1-1.

The second goal in the tie was always going to be vital and it fell to Manchester after 9 minutes of the second half. A defence-splitting pass fell to Dutoy, who despite having an extra man in support, expertly beat the defender as well as taking it around the goal keeper. Despite being fouled, and claiming said foul with one hand raised in the air, he still managed to pass the ball into the open net with the other. Although initially appearing to reward the foul, the referee decided to play the advantage and let the goal stand.

Manchester went onto dominate much of the rest of the match, Edinburgh’s only real chance of the second half coming from a dubious penalty corner that ended up being intercepted by Clegg. The half was finished off with another Manchester goal. The first shot from Mullibland was well saved by Edinburgh’s keeper, and the rebound from Brooke was parried to Jabbal who grabbed his second of the game.

Ultimately, it was a comfortable win for Manchester. Despite the Northern 1A leaders having a difficult first half and falling behind, their superiority shone through in the second to see them progress to the next round of the BUCS trophy.