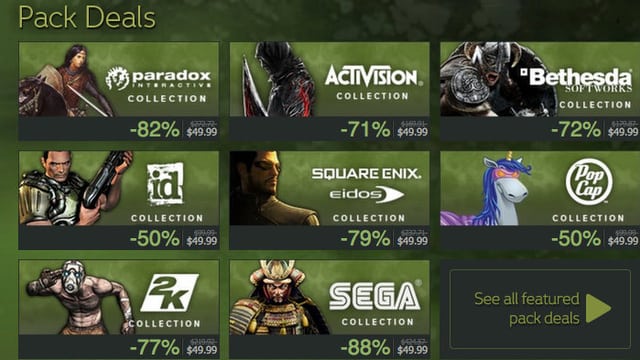 Screenshot of a Steam sale

Gaming at university is a challenge, while you’ll probably have the time; it’s unlikely you’ll have the cash to keep up with the latest releases. Making every penny stretch is vital to maintaining a gaming habit at uni, to help our readers out The Mancunion has decided to share our best tips for gaming on a budget.

For games light on multiplayer content, buy pre-owned. It may seem obvious but the best way to cut costs is to buy second-hand. Buyers beware though; more and more games are coming with DLC included, so the costs of buying the DLC again might cancel out the savings made. Still, I managed to get Max Payne 3 for £7.99, which for the single player alone is a bargain.

Follow @SavyGamer on twitter for regular updates of the latest deals in gaming. There are literally hundreds of sites selling games out there and to keep up on every deal is nigh on impossible. Thankfully, SavyGamer regularly collates the best deals and voucher codes online keeping you up to date.

The Humble Bundle is a great source of good games for low prices. Every six months or so, they release a pay what you want bundle of indie games. That’s right you can get great games for pennies. If you decide to pay more than the average payment you can get additional games. Oh and did I mention a proportion of the proceeds go to the charity.

Humble Bundle recently outdid themselves by partnering with the beleaguered publisher THQ to put out the Humble THQ Bundle, featuring great games including Saints Row: The Third, Metro 2033, and Company of Heroes. You can subscribe online so you never miss out on the best deals.

Finally, it’s impossible to talk about deals in gaming without mentioning the Steam Sale. Steam sales are like Boxing Day on crack. You have the power to grab a years worth of games for under a hundred pounds, however as the great philosopher Uncle Ben once said, “With great power, comes great responsibility”. You need to set yourself limits or else you’ll be knee deep into your overdraft with more games than you could have ever hoped to play (Train Simulator 2013 anyone?).