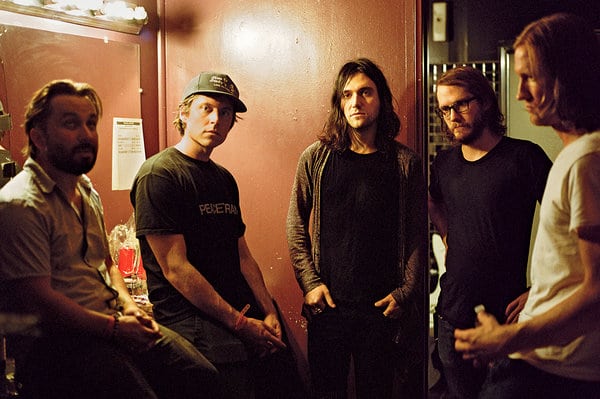 Desaparecidos made up for lost time at Academy 2

When Desaparecidos, Spanish for ‘the disappeared ones’, did a vanishing act all of their own eleven years ago, they left behind an album’s worth of jittery, stinging post-punk behind them that many fans probably thought they’d never see performed. Fronted by Bright Eyes’ Conor Oberst, Desaparecidos is what happens when Oberst puts down the copy of Don DeLillo and picks up a distortion pedal and leafs through a hand me down of A People’s History of the United States instead. In the current climate, it’s no surprise that their songs of socioeconomic woes ring truer than ever, and with their reformation, the band’s fans finally get to hear tunes about tax brackets, payment plans and suburban malaise. Wait, they’re better than they sound.

Given that the band hasn’t played live for almost 10 years, there isn’t much sense of occasion. What’s in its place is a collection of rough-hewn energetic punk rock and a brutally acerbic Oberst. “Here’s a song about buying shit you really don’t need” he states before launching into the third song of the set. Elsewhere, he prefaces rollicking new track ‘Backsell’ with “if you’re planning on being in the music industry, be prepared for a lot of fellatio”. Oberst is furious, hawking up globs of spit between lyrics, angry at an American Dream that’s still asleep. Conversely, the rest of the band couldn’t be any different; high fiving and joking around throughout the set. Musically though, they’re excellent, and the new material sits alongside old favourites with ease. ‘Greater Omaha’ sees the band and the crowd getting the closest to a frenzy for the whole set, while ‘Man and Wife, the Latter’, a tale of souring marriage, lulls the venue to serenity before splitting heads for its climax. A rousing cover of The Clash’s ‘Spanish Bombs’ and their own ‘Hole In One’ closes the set.

However, the night is not without fault. Specifically, ‘Man and Wife, the Former’ lost much of the festering anxiety the studio version simmers with, which was disappointing, as it’s one of their finest songs. Moreover, a sense of deflation seemed to cover some parts of the room. Perhaps portions of the crowd were dismayed by the change to the larger Academy 2 or the set’s short running time; nevertheless, the levels of excitement in the room were sadly not one a reunited band should command.