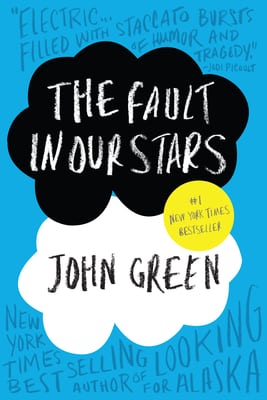 The Fault in Our Stars (John Green) – Review

The Fault in ours Stars, written by John Green, is a love story between two teenagers with cancer (it’s more fun than it sounds). It became The New York Times’ #1 bestseller and was branded “damn near genius” by Time Magazine. When I came to read it I confess, I was scared, because of this central, unrelenting theme, our generation’s biggest collective fear: cancer.

Hazel Grace Lancaster is our narrator; she was diagnosed with thyroid cancer when she was 13 years old, and is dependent on a ‘miracle’ drug that is prolonging her life for an undetermined period, only preventing her tumours from growing.

She spends a lot of her time at home, in Indianapolis, watching America’s Next Top Model and thinking about death. Worried that her daughter might be depressed, Hazel’s mum makes her attend a Cancer Kid Support Group and it is there she meets Augustus Waters.

Augustus is 17 years old, and is in remission, after suffering from osteosarcoma and losing a leg from it. Their interaction begins with a book that Hazel lends to Augustus, and ends in love.

Even if the storyline doesn’t scream ‘funny’, Green makes it very funny. Hazel’s narration is very witty, and her talks with Augustus are always philosophical, yet so teenagerly romantic. One thing that surprised me in this book is the fact that the author, despite being a man, narrates the book through a girl’s perspective, and does so extremely well.

This book provides a different approach to cancer. One we’re not used to in media representations. It’s never easy to handle such a delicate subject but Green presents something real about the lives of those affected – it’s hard on everyone involved, but no one stops being their own person because they have cancer, no one stops being a teenager because they are a patient.

These are reflections about life and death and all in between. It should come with a warning (but not the one I presumed): it will make you think, about all of this and the end of it.