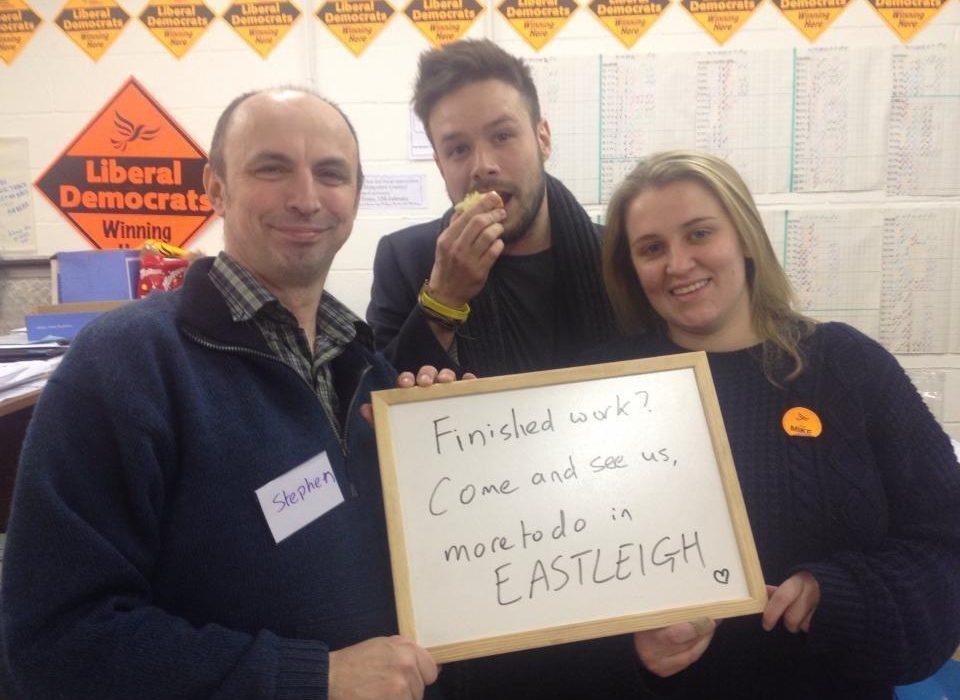 The Eastleigh by-election: a student’s view from the front line

For the Liberal Democrats, the Eastleigh by-election began under dark circumstances. A guilty plea to perverting the course of justice and poll numbers in single figures aren’t the best environment for a resounding victory. But the Liberal Democrats did what we do best – rallied round and descended on the residents of Eastleigh, armed with leaflets, enthusiasm and anoraks in case of rain.

We knew we had to hold Eastleigh, that this by-election was make it or break it time for the party, we had to win. And that’s why I left my lectures behind and joined the hundreds of volunteers showing up every day. Within days we had found ourselves a giant warehouse to run the operation out of, raised tens of thousands of pounds online and encouraged volunteers from Orkney to Newquay to set up volunteer phone banks.

Despite hundreds of people turning up every day to go door-knocking, deliver leaflets or stuff letters into envelopes, we knew our task was immense. Every person passing through the building knew losing wasn’t an option.

Local Councillor Mike Thornton was selected as the candidate for the Liberal Democrats. He had lived in the area for nineteen years and knew the constituency back to front. Against a Tory whose party wouldn’t let her speak to the media (see the YouTube video of her leaving the count) and a Labour candidate whose own book told people to vote Liberal Democrat tactically, the race heated up quite nicely.

With UKIP also pouring huge resources into Eastleigh, we soon found ourselves in a four-way battle. The key rule of by-elections is to do more than your competitors – if they put out a constituency-wide leaflet every day, so must you. If they knock on 5000 doors a day, you knock on 6000, for every £10 they raise online, you must raise £20. With this ever-deepening spiral of leaflet delivery comes an increased media frenzy.

Whether it was journalists pretending to be activists to catch someone unawares, turning up with eight cameras or forming a human wall outside HQ to catch the Nick Clegg rally, the media took a particular interest in this election. And of course, not all of it is positive coverage. The collapse of the Vicky Pryce trial, continuing Chris Huhne coverage and allegations regarding Lord Rennard kept the by-election firmly in the spotlight. But Liberal Democrats are nothing if not resilient, and volunteer numbers kept on rising day by day as we churned out hundreds of thousands of pieces of paper.

Polling Day was a masterpiece. From opening the office at 3.45am until the polls closed we worked every minute out of six offices across the constituency to get our vote to the polls – including at 9.54pm finding a woman who’d given birth that morning and wanted to vote!

Hearing Mike declared the winner was truly an amazing moment – surrounded by hundreds of friends old and new, it was a moment I’ll never forget and was worth every blister, paper-cut and sleepless night for.

As good as our night turned out, Labour and the Conservatives must have felt quite differently. Labour were squeezed into fourth and the Tories third – the first time those two parties have both been outside the top two since 1950. Liberal Democrats are historically the party of by-elections, for 30 years they’ve taken seats against Labour and the Conservatives, shocking the establishment and often coming out of nowhere to take the seat. Except, as a young Liberal Democrat, these by-election victories are just stories – the last seats taken by the party  were Dunfermline and West Fife in 2005, or Brent East in 2004, when most young activists were barely out of primary school.

So to actually see a real Lib Dem by-election machine was an honour and a privilege – I watched as myth became reality in front of my eyes. The strength of the individuals who gave so much to keep Eastleigh yellow was inspiring, and those people who just kept doing one more street – despite it being the hundredth of the day – are heroes. Our team became a family – supporting each other with cake and passion to win. So don’t count the Lib Dems out quite yet, because we’re not going anywhere.