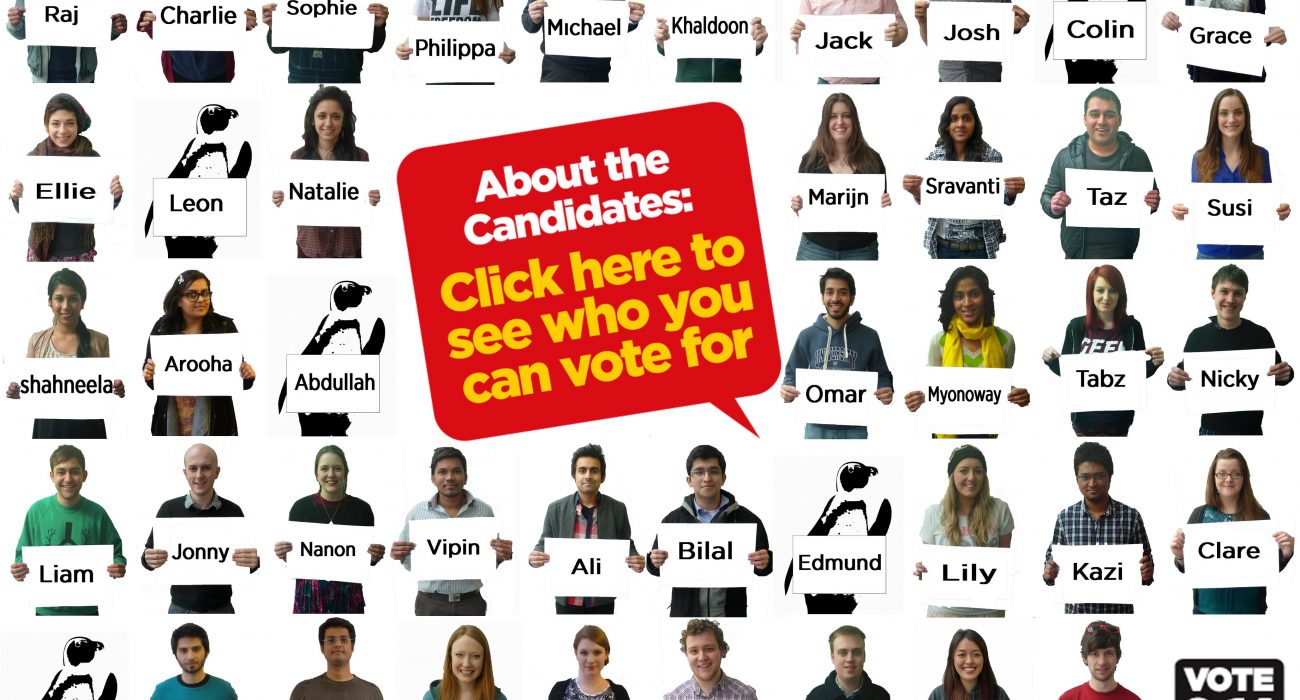 All of the candidates for the UMSU executive elections, 2013.

People walking into Uni in the week preceding the election do so wearing blinkers. The chalking on the floor, the brightly coloured posters wallpapering the Union, the banners flapping menacingly in the wind wash over a student body totally disengaged and sick to the back teeth of elections and the oh-so-hilarious punnery of would-be student politicians.

A shiny iPad being shoved in people’s faces brings out the magpie in us all, and could well be just the thing to break the cycle of disinterest from students. Most students aren’t so stupid as to be pressured into voting for just anyone who puts an iPad in front of them, but to have the elections presented as something than can be slick, modern, forward-thinking instead of as a shabby bed sheet banner could have a genuinely large effect on student interest.

For those thinking that I might be guilty of over simplifying this somewhat, there is surely a reason why so many departments at the University are investing in these technologies: when things are presented in a slicker way, they are more appealing. This is basic advertising psychology: present things in an appealing way and they will appeal to more people.

For a union that had a turnout of but 7,953 voters out of 40,000 students in the 2012 executive elections, making this figure grow has to be an absolute priority. With candidates using iPads during their campaign you make every campaigner a walking polling station whose aim is to increase votes, allowing students to vote wherever they are at that time. With this, voter turnout would of course increase, which would make the results, whatever they might be, carry far more of a mandate.

With a greater involvement of the student body comes a greater effect of the Union – more people engaged in the outcome of the elections means more people sufficiently engaged in the actions of the executive, and more people invested in them acting appropriately; this can surely only mean better outcomes for everybody.

My first thought when contemplating the question of iPads is quite frankly, how on earth could anybody support their use? A tool only the wealthiest campaigners can access, no way to know if they’re being used in an intimidatory way, and so many complaints and suspicions surrounding  their use that we’ve all lost count.

Supporters of the tablets highlight the fact that they can be used as a mobile polling station, meaning any campaigner anywhere can encourage higher numbers of votes, so long as they’ve found themselves a University of Manchester student. Alternatively, of course, this means that any campaigner with a tablet becomes a one person intimidatory machine, who can pressure underinformed people into voting for them with promises of sweet baked goods. Remember that it is permissible, under this years guidelines, for candidates and their supporters to give out food; not in exchange for votes of course but merely to ‘boost their campaign’. The fact is though that policies such as these are just impossible to police and can quite frequently result in actions that undermine the electoral process, as anyone who has been cornered by a cake-wielding campaigner can attest.

To those who think that turnout should be the number one priority in these elections, and are willing to sacrifice a degree of fairness and free voting in order to achieve maximum votes at costs, I say this: you have got your priorities entirely in the wrong order. Having more people voting would be great, but surely a more positive way to increase this would be to have more engaging advertising of the elections as a whole, or, god forbid, more engaging manifestos from the candidates. Shoving technology down people’s throats smacks of desperation somewhat, particularly when it is done to the detriment of free and fair elections.

Even if it were possible to ensure that tablets weren’t being used in a harmful way, the simple fact of the matter is that a policy that disadvantages people based on their wealth is surely absolutely not OK and entirely not within the spirit of a fair and free democracy, nor does it chime with the fluffy liberal values for which our SU is known and loved.