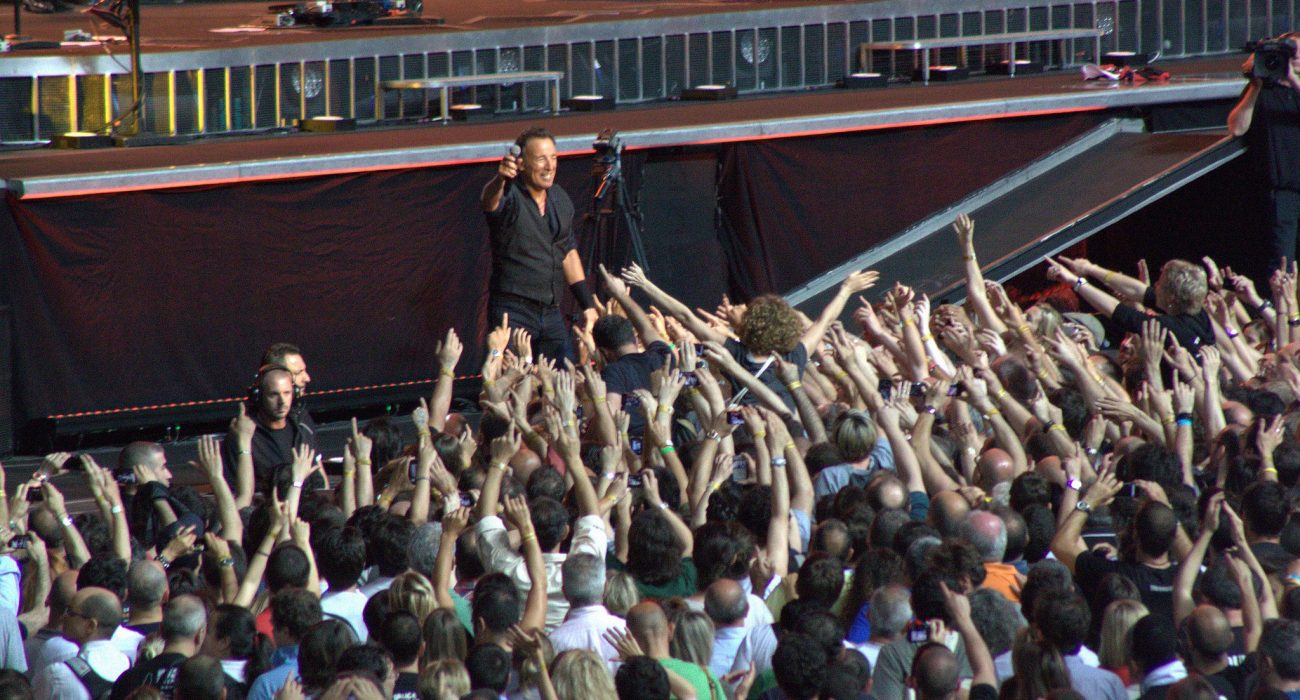 “I think Wrecking Ball is some of his best work, and that from a man who has had a 40 year career is pretty inspiring. For me it was a no brainer.” Director Baillie Walsh recalls how the chance to make a film about the Boss was just too good to pass up. “I was in the middle of writing my next feature film and they called me up and asked if I’d make this film, I said give me an hour to think about it and within 2 minutes I got back on the phone and said sign me up. I thought it was a really interesting concept. I hadn’t seen a film like this and I thought it was a really unique way to make a film about an artist, who despite being in his sixties is still making music that is incredibly relevant.”

“Funnily enough I didn’t come to the project as a Bruce fan, but I am leaving it as a great admirer of the man and the music”. Springsteen & I features enhanced footage from the 40 years of Bruce live performances, with intimate black and white videos to full HD shot clips from the infamous Hard Rock Calling festival. “We approached Bruce for access to the archive footage and amazingly they gave us permission. They said we like the idea, you’ve got access to the music and we don’t any editorial contribution, we don’t the record company get involved – make your film and let us see what you come up with. Luckily, they really liked it. There are lots of laughs in this film; I think we all know who Bruce is. He isn’t supported by Microsoft; there are no skeletons in the closet. It’s a charming portrait of the man through the fans.”

This type of recognition for an artist is one few will ever experience, but as ever the Boss accepted it with grace and humility. “He really liked it; I think he was self-conscious at first, perhaps a bit awkward to watch a film praising himself from start to finish. Bruce has such a great relationship with his fans and subsequently has a great interest in what they have to say.”

With homemade videos making up the bulk of the film, Baillie was impressed by how seriously the fans took it. “We had over 2000 contributors send films in, and to be honest we didn’t know what we were going to get, but surprisingly we didn’t get any crazy ones, most had a story and were very eloquent and well made.”

“We didn’t get celebrities, we could have done but I didn’t want it to be a celebrity talking head kind of thing, it’s much more regular people telling genuine stories about someone who means a hell of a lot to them”.

“You could make this type of film about another performer but I don’t think it would work anywhere near as well, he has a very particular relationship with his fans. Bruce is about heart, and is a very decent and fundamentally honest man – he’s remained true to himself. The key thing is that Dylan doesn’t have this relationship with his fans, Bowie doesn’t have this either, no other artist has this bond. I think people simply trust Bruce Springsteen, which in this world we live in is very rare.”

Although Springsteen captured hearts through the radio, it’s in the live environment where the Boss really dominates. “I saw him live in New Jersey when I met him which was a really great experience. Do I think he’s the greatest love performer? There’s a question, he’s obviously brilliant. What’s great about his performance is the interaction he has with his audience and there is no other performer that has that. On that level he is the greatest live performer. I think he’s got as much time left as he wants, he’ll still be doing it when he’s 70 I reckon.”

Springsteen & I is in cinemas this July http://www.springsteenandi.com/