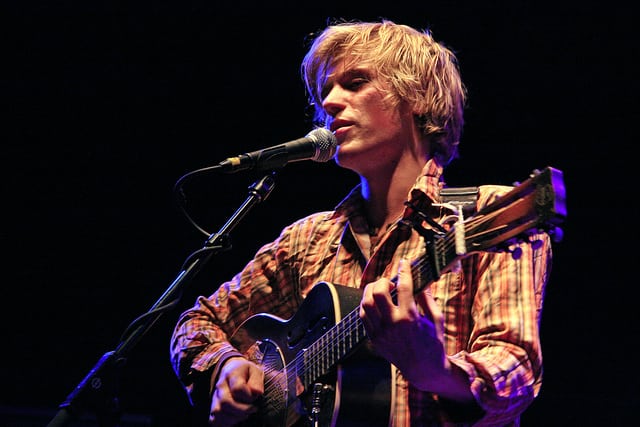 Johnny Flynn has, of late, been taking to the stage in rather unconventional get-up. After undertaking cross-dressing roles in recent theatre productions of Richard III and The Twelfth Night, the multi-talented singer/actor must be relieved at this more casual dress code. So casual, in fact, that he steps up to the Deaf Institute’s diminutive stage in a t-shirt ridden with holes, using a guitar strap held together with old shoelaces. Looking every bit the Shakespearean stableboy with his disheveled blonde hair and charming wit, it’s no wonder Flynn is often branded the poster-boy of London’s “nu-folk scene”; an apparent folk revival that has seen artists like Mumford & Sons and Laura Marling, both of whom Flynn has collaborated with, emerge as huge talents.

It is with no small amount of humble gratitude that the Sussex Wit frontman thanks the crowd for turning up, before kicking off proceedings with ‘The Ghost of O’Donahue’ from 2008’s A Larum. Appearing solo without his usual extensive band, the songs are delivered in a stripped-down fashion, but with a masterful display of guitar work. His fingers are a constant blur across the strings; it’s astounding that such a sound can be produced from a single guitar, a distinctive resonator model from the 1930s that requires re-tuning between each and every song, no less.

New tracks from upcoming album Country Mile are unveiled throughout the night, and despite more than a couple of false starts from Flynn, they go down a treat. ‘The Lady is Risen’ employs his full vocal range, featuring a chorus with exquisite highs, while the last verse of ‘Bottom of the Sea Blues’ sees him deliver lyrics at a blistering speed that would put most rap artists to shame.

Flynn’s between-song interaction with the packed crowd can only be described as awkward, but is delicately poised on the endearing, not the uncomfortable, end of the spectrum. His obvious shyness does nothing to detract from the set, which features fan-favourites ‘The Wrote & The Writ’ and ‘The Box’; on the contrary, he actually cuts a remarkably likable figure whilst mumbling his way through an anecdote about Travel Scrabble and middle-english words.

After an energetic rendition of ‘Tickle Me Pink’ that has all the crowd chanting its anthemic outro, an encore of ‘The Water’ could have been severely lacking with the absence of Laura Marling’s hauntingly-beautiful vocals from the studio version. Luckily, Flynn politely asks the crowd to help with harmonies and they are more than happy to oblige.

There’s only one word for such a moving, intimate performance, and for the night itself: extraordinary. And for the record, Johnny, that would get you the tidy sum of twenty-four points in Scrabble.