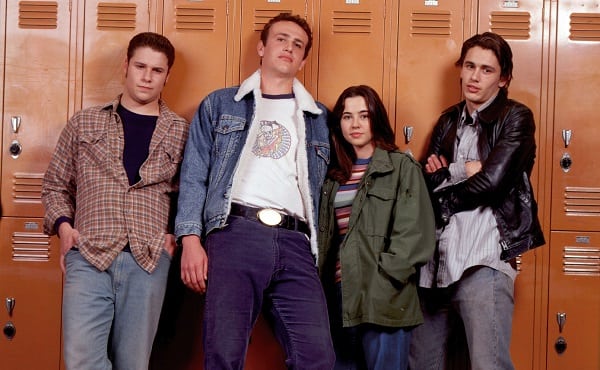 From the Vault: Freaks and Geeks

The opening of the first episode of Freaks and Geeks sets the tone of what’s to follow. The camera pans across a typical American high school soccer field before settling on two blonde teenagers sitting on the bleachers. He’s a football player, she, a cheerleader. “You seem so distant these days, Brad,” the girl says softly. “Is it something I did?” Brad can’t say anything at first, but eventually, he manages to croak a response. “Ashley, it’s just – I love you so much, it scares me.” They embrace tearfully, the music changes, and the camera dips below the bleachers, where the Freaks hang out.

Created by Bridesmaids director Paul Feig and co-produced by Judd Apatow, Freaks and Geeks aired from 1999-2000 on NBC. Set in an ordinary Detroit suburb in 1980, the comedy-drama series centres around Lindsay Weir (Linda Cardellini) and her younger brother Sam (John Francis Daley), as they attempt to navigate their way through their teenage years. Lindsay desperately wants to shake off her association with the Mathletes and ingratiate herself with a new group, but in a break from most representations of American high school, she’s not fussed about being one of the popular kids. She’d rather hang out with the “Freaks”, stringy-haired slackers who skip classes, smoke and talk about Led Zeppelin: Nick (Jason Segel), Ken (Seth Rogen), Kim (Busy Phillips) and Daniel (James Franco). Lindsay’s stumbling transition from very, very good girl to army-jacket-wearing, sort-of-but-not-really-rebel is the driving force behind much of the show. Most of all, she wants to impress Daniel, the Freaks’ manipulative but irresistible ringleader, but is petrified at the prospect of helping him cheat on a maths test, hosting a house party or doing anything that might get her into trouble. Meanwhile, 13-year-old Sam has his own issues to deal with, which are – refreshingly – given just as much screen-time as his elder sister’s. He’s in love with a cheerleader, targeted by bullies, and his hilarious best friends are excruciating geeks.

If these issues sound rather low-key, that’s because they are – but this is one of Freaks and Geeks’ greatest strengths. The world inhabited by Lindsay, Sam and their friends is completely prosaic and therefore utterly relatable, which is a surprisingly rare quality in a teen TV show. For most of us, our secondary school years resembled the ludicrous glamour of Gossip Girl, or the improbable romantic entanglements of Dawson’s Creek, as much as they did a National Geographic documentary. Our teenage memories are likely to look a lot more like Lindsay and Sam’s: clumsy social navigation, awkward attempts at romance, and the frequent intrusion of embarrassingly normal parents who insist on you sitting down for dinner and doing your homework. That’s not, however, to say that the storylines in Freaks and Geeks come across as trivial or inane. They are treated with all the sincerity that one feels at school, when the fact that you didn’t know who a band were really did feel like the worst thing that could possibly happen. And to top it all, it’s really, really funny. (Sample line, from Lindsay and Sam’s dad: “Everyone’s a Democrat until they get a little money. Then they come to their senses!”)

Sadly, as Barbra Streisand sang, “the good things never last,” and NBC cancelled Freaks and Geeks in 2000 after just 12 episodes. While the show has since acquired cult status – and many of its key players gone on to staggering Hollywood success – this does little to ease the pain of never knowing what happens to the Weir kids and their friends. But if you think you can handle the pain of saying goodbye to a pitch-perfect high school series after just one season, I’d advise you to dive in. If nothing else, you get to look at a 21-year-old James Franco – and who doesn’t want that?