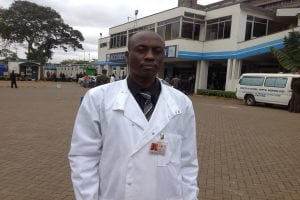 A former University of Manchester PhD student has talked about his experiences working as a volunteer doctor following the tragic Kenyan mall massacre last month.

Dr. Innocent Orora Maranga, who completed his PhD at the University’s Institute of Cancer Sciences and is currently a consultant gynaecologist in Nairobi, gave his assistance to those affected in the terrorist attack which caused 67 confirmed deaths.

He highlighted the continuing strain on Kenyan hospitals, “The Westgate siege is over, thank God, but we still have tens of people still admitted in various hospitals across the city….mostly in Intensive Care Units with serious injuries; mainly gunshot wounds and shrapnel injuries from explosives.

“My involvement was mainly on receiving casualties ferried in by numerous ambulances. The first day of the attack was the most chaotic when ten ambulances could arrive at one go. Those on duty couldn’t manage by any stretch of imagination.

“But thanks to the many volunteers who arrived simultaneously including the hospital emergency response team, the situation came albeit slowly under control.

“Curious onlookers jammed the hospital to see for themselves what was unfolding – and this at times added to the chaos.”

Dr. Maranga, who founded the Kenyan charity CRT-K, an organisation which pays for free screening and treatment costs for low-income women with cervical cancer was thankful of his training at the University of Manchester.

“Looking back at what I’ve seen and experienced over the past few days, I can’t help but be grateful for the invaluable training I received in Manchester. Working long hours on my doctorate, staying at it even when results are nothing but discouraging was not in vain.

“The additional training I attended on ‘Manchester Leadership Program’ came in handy on organizational skills and handling/participating in emergency volunteer situations came into play.

“To cut the long story short, I left Manchester hardened and prepared for a tough merciless world! I have no regrets whatsoever for the four years I spent toiling in Manchester.

“I must stress however, that my contribution in this tragedy was but a small sacrifice, there’re many unsung heroes and heroines who went into extraordinary levels to save the hostages. Mine was just that tiny little screw which tightens the spoke of the wheel to enable a bicycle to move!”