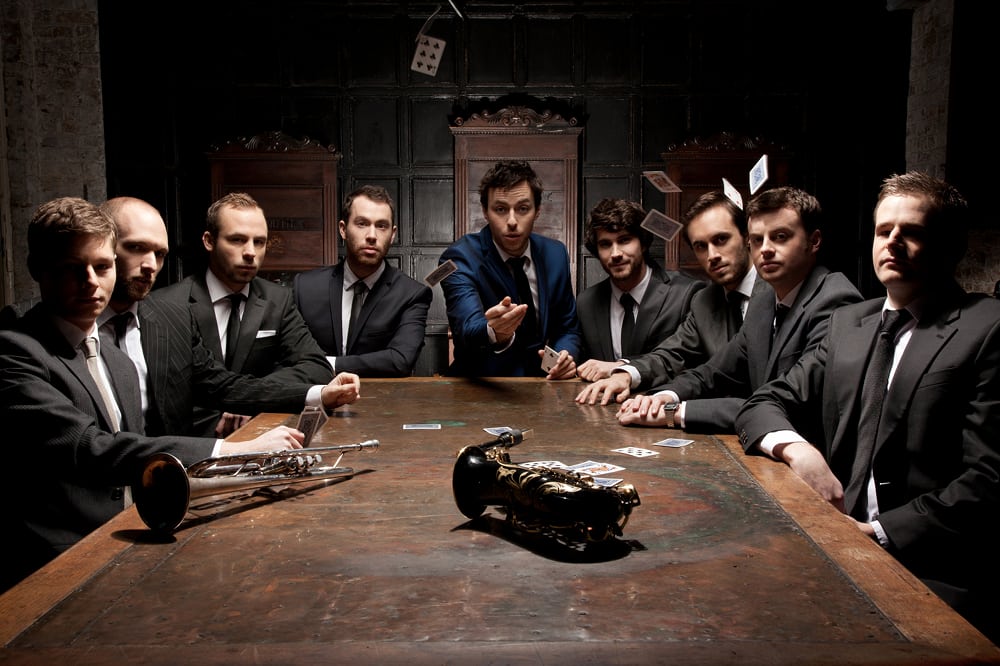 Pioneers of Reggae revival with modern dance floor dynamics, Gentleman’s Dub Club are a group of musicians, engineers and writers who are bringing the authenticity of live performance back to the UK Music scene. With their long awaited debut album FOURtyFOUR due for release on 21st October, I caught up with the band to discuss the creative process, social commentary and a live set up that’ll knock you sideways.

What is the concept behind the new album FOURtyFOUR?

It’s really a combination of loads of different styles that range from Ska to Reggae, Dub and even some Grime in parts. We tried to reflect the heavy weight bass and fun in our live shows and capture that on record.

How important was it for you to have this variety of influences in your sound?

Well, as there is a lot of us, the influences mainly came from the music that we all listen to and like as people. The record was produced by our bass player, Toby and he did the vast majority of the production. Although the main concept was to capture the energy of a live show with different tempo and beats, the album mainly revolves around Bass music.

In five words then, how would you describe your sound for those who aren’t familiar with you?

Track ‘Riot’ has a very important social message. What inspired this?

‘Riot’ isn’t so much about London in particular or even social commentary. It’s more about the state of mind present in today’s youth. The track was quite a personal thing to Johnny (lead singer) and aims to reflect where society is at now. I’d say it’s more about how society is losing its humanity.

Are there any other tracks on the new album that are politically motivated?

‘Give It Away’ is about looking at peoples’ journeys. The band always have deep lyrics about human struggle alongside the party vibes.

With so many of you who make up Gentleman’s Dub Club, what is the creative process like?

It can be hectic, but generally there’s three or four main writers, they’ll bring a tune to the band, Johnny will think about main line melodies and lyrics and then we’ll all play it live and work out different bits of the structure. Normally however, the foundation of the song is usually written before it all comes together.

How important is it for you to have a live set up at your gigs?

The hardest part is to translate between the live and the record. Lots of artists have experienced that and so we’ve built up a reputation of consistently strong live songs that aim to smash it every time. The live is so important. With us it’s all live, no backing track. As the tempo swings around, it allows us to speed up and improvise and that’s the secret to a really tight live show.

What has been your favourite live show that you’ve done in the past and why?

Outlook festival! Its always absolutely crazy with 6,500 people watching our show this year. This summer in Boomtown was also amazing.

We’re looking forward to hitting Hit&Run at Mint Lounge in Manchester on the 21st October. Last time we played Manchester, it was at the Ritz and it was absolutely packed.

What other artists are you really admiring at the moment?

What does the future hold beyond the release of this album?

We’re already looking at the summer for next year and festival season is always massive for us. We’re just starting to push into Europe, last year we played in India and now we want to tour France, Germany, Spain and America. That’s the big plan, to tour. We want to continue writing too although FOURtyFOUR took us 7 years to complete and so it’s a big accomplishment! Now we’ve found our method and formula for writing, it’s an exciting time.

You can catch the Gentleman’s Dub Club live at Mint Lounge in Manchester on 21st October by grabbing your ticket HERE.