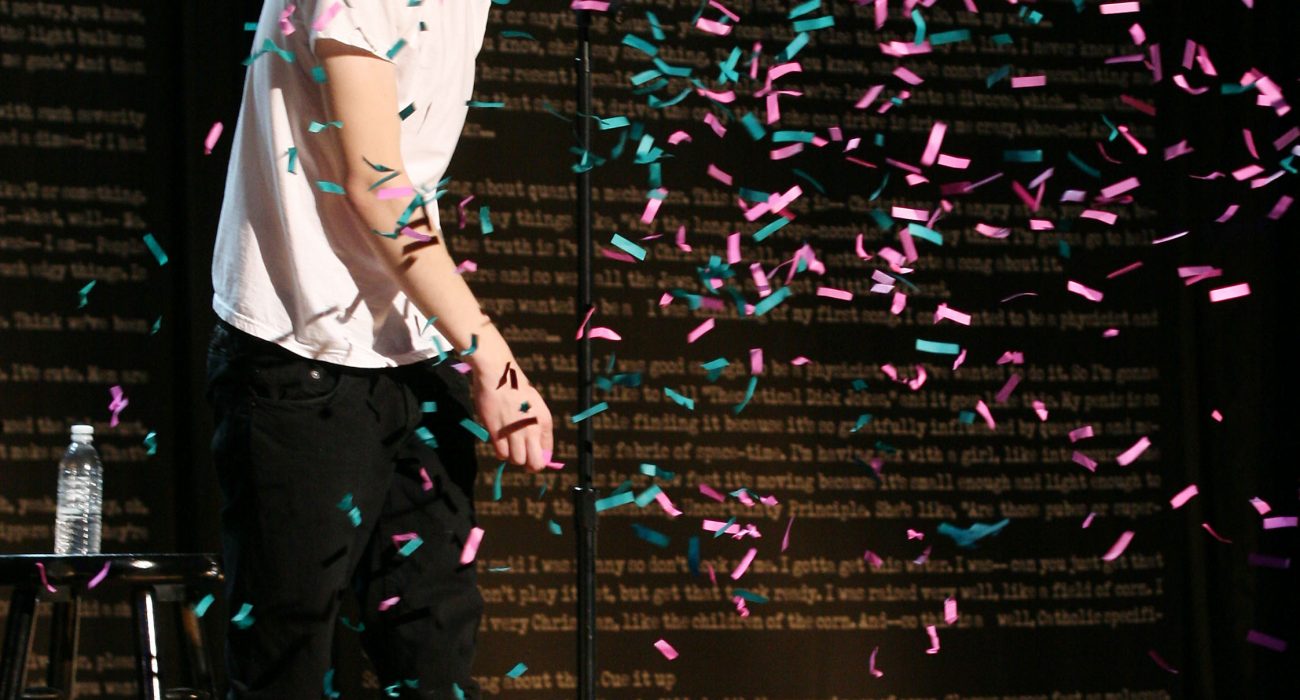 Bo Burnham’s rise to stardom has been impressive. Despite barely being older than most of the students who attend his shows, he has already had numerous sell-out shows at Edinburgh, wrote and starred in his own TV show and published a book of poems. He caught up with us just as he was about to start the UK leg of his current tour ‘What?’.

He describes his current show as “a big, weird theatrical comedy. For me it’s a product of confusion; music, comedy, poetry, jokes and who knows?”

Bo plans to release a live recording of the show for free online.

“I’ve been working on this thing for three years and I just want people to see it. Louis CK changed everything by releasing things for $5 in the US. I don’t feel I have the same big audience that I can just capitalise on for $5. I feel like there’s a lot of people who haven’t seen my stuff, maybe don’t think they’d like my stuff because of my earlier YouTube stuff and I just want as many people see it as possible.”

Even though he’s just 23 he’s already been putting out comedy for nigh on seven years. What was it like becoming a big name in comedy at such a young age?

“I don’t feel like I’m terribly huge. It feels to have been doing it long enough that I’ve got a bit of a grasp on it. Because I started so young, I feel I’ve had to let my act really change. Obviously when you’re 17 and 23, you radically change.

“Obviously, I don’t like the stuff I made when I was 17. But, it’s a good thing and it’s really helped me change because I’m constantly hating myself and hating what I just came up with.”

He still gets requests for the old YouTube material.

“I don’t go that far back, but I throw in a couple of old ones every show to appease that. There’s a danger with being a musical comic that it just becomes a concert and I’m not interested in that. But there are a few I can still find a bit of joy in. If you’ve paid money for a ticket, I want to give you something you haven’t seen.”

Bo has jumped from being the funniest guy on YouTube to becoming pretty much the undisputed king of Vine, Twitter’s six-second video sharing service. What is it about the six-second format that is so great for comedy?

“I’ve jumped from one pigeon hole to the next. Vine’s already become very weird and terrible. It was fun to be able to make stupid, little jokes and I think I’m probably good at stupid, little quick jokes.

“I think I can write for the ADD generation, and nothing is more indicative of that than Vine, an app that cuts you off at the seventh second. In America, there are people who will come up to me on the street and be like “Are you the guy from Vine?” So apparently I am. This app is going to crash and burn in 20 seconds but it’s fun to have been apart of it.

“If someone had come up with Vine a year ago and put it in a movie, it would have been the most ingenious satire of Hollywood. The idea that people get famous for six second videos, literally fifteen minutes of fame was a joke and now Vine is even more ridiculous than that.”

Fame is a topic that fascinates Bo. His TV show Zach Stone is Gonne Be Famous follows Zach, an 18 year-old pre-celebrity who splashes his life savings on hiring a film crew to create a reality TV show based around his quest to become famous. Bo, who plays the lead and also wrote it, wanted to question the idea of becoming famous for fame’s sake.

“I was interested in fame’s impact on how young people and how young people view their priorities and their future. In America, there was a study done where they asked high school students what they wanted to be when they grow up and first place by a mile was famous at like 40%.

“It seems so untenable and insane and probably not good, even me being on the inside of it to a very small degree, it becomes very empty, inconsequential and silly. It’s also just very funny I think because in order to want that you have to change your priorities to centre on very silly and frivolous things.

“It wouldn’t be as funny if thoughtful and quiet people were becoming famous, but the fact that it’s just loud idiots that people are emulating immediately makes it funnier.”

Bizarrely, it aired on MTV, which seems to be the mecca of loudmouths who want to be famous for fame’s sake. How did he get them to show it?

“We barely got them to broadcast it. Even when they were broadcasting it, they weren’t really advertising it or anything. At the time it was airing, I was like ‘Oh shit, I really am in the belly of the beast right now’. I was trying to start a conversation with kids without them even realising what the conversation was, because the viewers are so young I think.

“When it was getting advertised I was getting tweets saying ‘Why is Zach Stone getting a show, I want to be famous why can’t I get a show?’”

After not getting promoted at all and being scheduled erratically, MTV opted to cancel it after just one season. Did it ever intend to stretch beyond just 12 episodes?

“I am very happy to have made 12, but when we were making the show it was certainly an idea it would last. Before it even aired, I was aware of certain things about the network’s attitude towards it, I don’t think they were really on-board with it, I was not sure it was going to really last.

Undeterred by his experience with MTV, Bo still would like to make another TV show down the line.

“I may even try to make a show over here if possible. I just love how it’s structure over here with like six episodes a season. It seems much more controllable, rather than like America where you pop out 20 episodes a season and if you don’t get 100 episodes then it’s a failure as a show.”

On stage, Bo adopts a persona that’s much closer to his old YouTube material, a sort of enthusiastic hammy-ness.

“My persona is most importantly just to communicate the material in a way that is most funny and meaningful in the moment. It’s more like a character that’s sculpted for whatever joke needs communicating at the moment.

“It’s not most important to communicate myself on stage as it is to be as funny or interesting as I possibly can on stage.  I feel more like I’m doing a play whose main character just happens to share my name.”

“When I was writing Zach Stone I had to spend a lot of time rewriting things and responding to notes from the network, I would go to a coffee shop and just write whatever I wanted to write. Then I had a large collection of poems, and I whittled it down to the one’s I though were worthy of the public’s attention.

“Hopefully it’s a fun, weird and whimsical collection of things which are hopefully reflective of things people enjoy in my act, but I didn’t want it to be just a book form of my stand-up act.”

One myth Bo wanted to bust was the idea that there was a college campus backlash against his comedy. Wikipedia tells us that his material was protested for being racist, homophobic and for mocking the disabled. The truth is a little different.

“Literally ten students in a college in Mississippi protested my thing as part of student group. That’s the only time it has ever happened, they misquoted lyrics. Because of Wikipedia everyone thinks I’ve been protested, it was a big controversy when there was just ten kids outside.

“I think controversy has this allusion of being controversial but it’s totally not, which is why I’m trying to get away from it because it’s just easy and automatic.

“The more controversial thing to do now is to be sentimental, to try to be honest, to try to be emotive in any way. That’s the stuff I feel that no one is really doing. Everyone is doing the sort of offensive ‘oohhhh’ jokes, it’s Apple Pie in America.”

Bo Burnham is performing live at The Dancehouse on Oxford Road on November the 12th and November 17th. Tickets are available through the Ticketline and The Dancehouse Box Office.

Bo Burnham’s new book ‘Egghead: or You Can’t Survive on Ideas Alone’ is out now in all good bookshops.