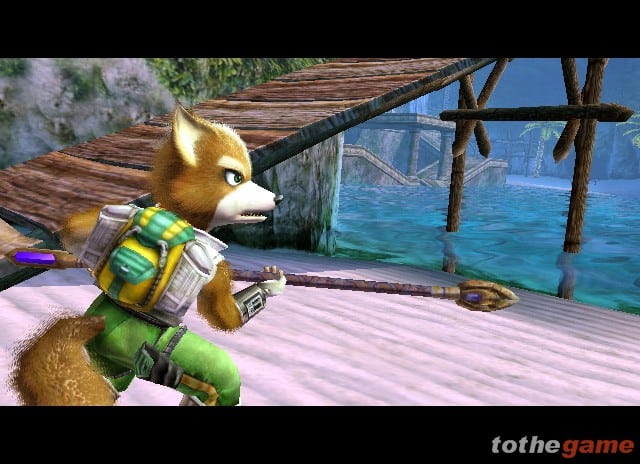 When people complain that Nintendo bank on the same franchises over and over again, their argument usually goes like this: “If it weren’t for Mario, Nintendo would be sunk. Oh, and Pokemon. And Zelda. Animal Crossing. Metroid. Pikmin…” and it goes on. But they always forget poor old Star Fox. And, to be fair, Nintendo themselves have rather forgotten the fuzzy pilot too. Without a single game out on Wii (besides Smash Bros) and nothing confirmed for Wii U, you could be forgiven for thinking Fox was all but done. And that’s a huge shame. Some of Nintendo’s very best titles (in my opinion) have been Star Fox. One of which is Star Fox Adventures.

Star Fox Adventures started life as a Rare-developed Nintendo 64 game called Dinosaur Planet, and had nothing to do with Fox McCloud. After seeing the game in development, Shigeru Miyamoto (the Nintendo wizard) noted just how much the design resembled Star Fox and so, a few years later, the game surfaced as a Star Fox brand Gamecube launch title. The game was also the last one Rare developed before being bought up by Microsoft. What we were left with was a Star Fox game set on a planet of dinosaurs. So far, so good.

When a world of talking dinosaurs found itself on the brink of destruction, they turned to the galaxy’s most famous talking animal to put them back together again. The link that brings Fox in is rather tenuous, and it’s easy to see how close this game came to having nothing to do with him. Despite all that, Adventures isn’t totally without some Star Fox style shooting sections and franchise trademarks. And, wouldn’t you know it, after a story about returning ancient spirits and stones to temples to put the whole planet back together it turns out that Andross, Fox’s nemesis was behind it all along.

Adventures was immediately recognised for its outstanding graphics and almost Zelda-like gameplay, something previously unheard-of for the Star Fox franchise. For a character that had previously only ever been seen inside a spaceship, his new found love of running around with a dinosaur buddy and fighting evil reptiles with a sceptre irritated some. While the game itself wasn’t anywhere near as long as your typical Zelda title, the gameplay and design were every bit as high quality. It’s a title that I often find myself wanting to play through on a spare afternoon, if only I could remember what I did with that tiny Gamecube disc.