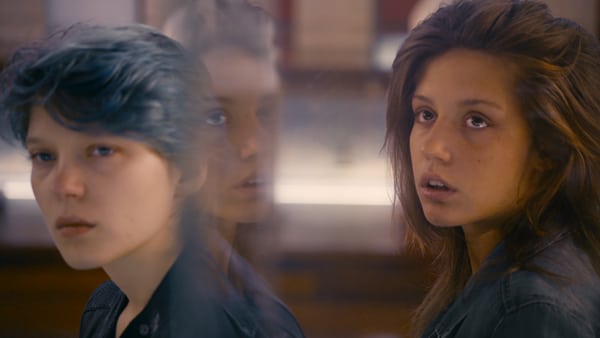 Cornerhouse Pick of the Week: Blue is the Warmest Colour

Blue Is the Warmest Colour (La vie d’Adèle: Chapitres 1 & 2 in its original french) is a coming-of-age story directed by Abdellatif Kechiche. Adèle’s (Adèle Exarchopoulos) life is changed when she meets Emma (Léa Seydoux), a young woman with blue hair, who will allow her to discover desire, to assert herself as a woman and as an adult.

It is based on the french graphic novel by Julie Maroh and follows similar themes of questioning sexuality, the want to conform and romantic loneliness. As Maroh has stated on her blog, though, the film is purely Kechiche’s interpretation of the source material. The visual style is similar when the focus is given to Emma’s blue hair. This marks her as different and shows the colour she brings to the protagonist’s life. One scene in the film shows the cold paleness and wintery blue of Emma side-by-side with Adèle’s warmer, earthy tones. The cinematographer Sofian El Fani does a tremendous job making almost every frame a beauty to behold.

The technique Kechiche uses often and to great effect is to have close ups of the characters’ faces, allowing you to see emotions from a flicker of a smile to a brightening in the eyes. Exarchopoulos and Seydoux have some incredibly powerful scenes where the full weight of emotion is shown, earning their place with Kechiche for the Palme d’Or at this year’s Cannes Film Festival.

The downside of all those close ups is that you see Adèle’s mouth open. A lot. And the eating in the film is not refined dining.

At almost 3 hours, be prepared for a long film. The pacing is different to most current films, where the emphasis is more on getting from one scene to the next as quickly and slickly as possible. This is more similar to the pacing from early cinema and other “arty” European cinema. The film is more of an experience to be chewed over (preferably with your mouth closed).