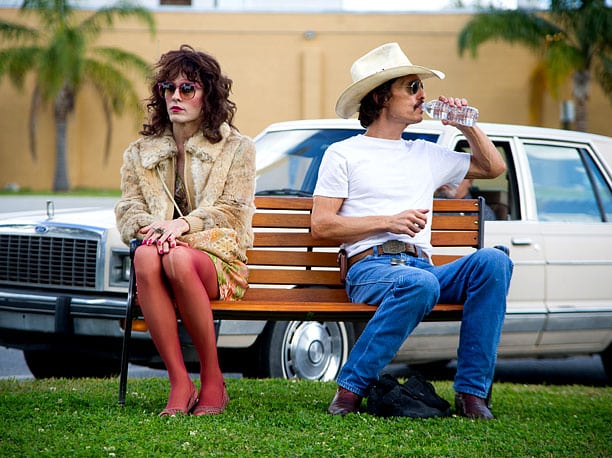 When Ron Woodroof (Matthew McConaughey) is asked to stay in hospital when it looks like his HIV treatment may not be working, he promptly walks out the door, stating “I prefer to die with my boots on”. And so encompasses the Texan outlaw in his crusade to save himself from the crippling AIDS epidemic of the 1980s. But like all great antiheroes he soon finds himself transforming the lives of others in the process.

But director Jean-Marc Vallée makes sure that our antihero’s true character is not diluted by his new circumstances. Certainly not. Within the first ten minutes the ‘anti’ in McConaughey’s antihero are laid bare, as he is shows to be a thoroughly unlikable homophobic, racist, chauvinist Southern hick. So when diagnosed as HIV-positive, his pursuit to learn more about the AIDS virus is as much as about reasserting his lost masculinity to the ‘gay disease’, as it is about finding a cure.

Which makes his partnership with transgender woman, Rayon, (Jared Leto) selling illegal drugs he’s smuggled from around the world, all the more unlikely and emotionally rewarding. As Ron becomes further integrated into the community of Dallas’ outcasts- the willing members of the Dallas Buyers Club- his friendship with Rayon grows closer, whilst never drifting into sentimentality. The restraint on the part of the film makers pays off when the tragic results of the AIDS death sentence take their toll.

Much has been made of the physical transformation of both McConaughey and Leto- and it is remarkable. McConaughey’s skeletal appearance is particularly haunting, but it is his performance which is truly revelatory. As Woodroof he allows his own personal charm and humour to shine through Ron’s hallowed features, and continues an incredible career resurgence, which could well see him pick up an Oscar next month.

For me it is Leto who carries Dallas Buyers Club’s emotional punch. I haven’t seen an actor inhabit a role so beautifully for years. So much so that in one of the film’s most heartbreaking scenes, when Rayon goes to see his estranged father, there is a genuine feeling of shock and unease at seeing Leto dressed in men’s clothing to please his father. Face bare and pleading for money to help fund his new business venture, her father sighs “God help me”. “He is helping you. I’ve got Aids”, Rayon replies. And in that scene Leto not only earns every award and acclaim he has received, but Dallas Buyers Club captures the dreadful emotional turmoil suffered by those who were ostracised by society and their families simply by virtue of who they were, and because they were sick.

Dallas Buyers Club is a modern day Western disguised as a searing social-issue drama. Or perhaps it’s the other way round. Either way, whilst our hero’s ultimate victory is not as satisfying as fiction would have allowed, his journey there is touching and funny enough that you end up simply grateful that this remarkable true story wasn’t left untold.