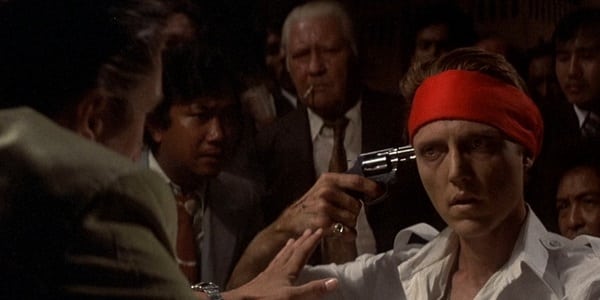 War movies are far from being an uncommon sight in popular culture, so it’s easy to let loose a groan of weariness when presented with the opportunity to watch another—while it is true that the filmmaking institution likes to squeeze every possible ounce of creative potential out the recent military conflicts of our time, if I were to name ten war movies that are essential viewing to even the most ardent sceptic of cinema, The Deer Hunter would certainly be one of them.

One thing that will probably surprise most first time viewers of this film is how little time we actually spend in the warzone. This is because The Deer Hunter is not so much a war movie as a movie about war and, more specifically, its impact on the lives of ordinary people.

Before Vietnam, we see the characters played by Robert De Niro, Christopher Walken and John Savage living their lives as normal Americans in a normal American town. By the time they’re back from the war, these three actors are playing completely different people. Anyone who has seen the film knows how much of an emotional gut-punch we get from this transformation. Everyone else can but speculate.

Although The Deer Hunter has come to be overshadowed by the cinematic colossus that is Apocalypse Now—which was released one year later—the two movies are entirely different experiences. One is a technical tour de force that gives us a haunting portrait of the war. The other is a harrowing emotional journey through the lives of people like ourselves in extraordinary surroundings. Neither of them can be missed by anyone.