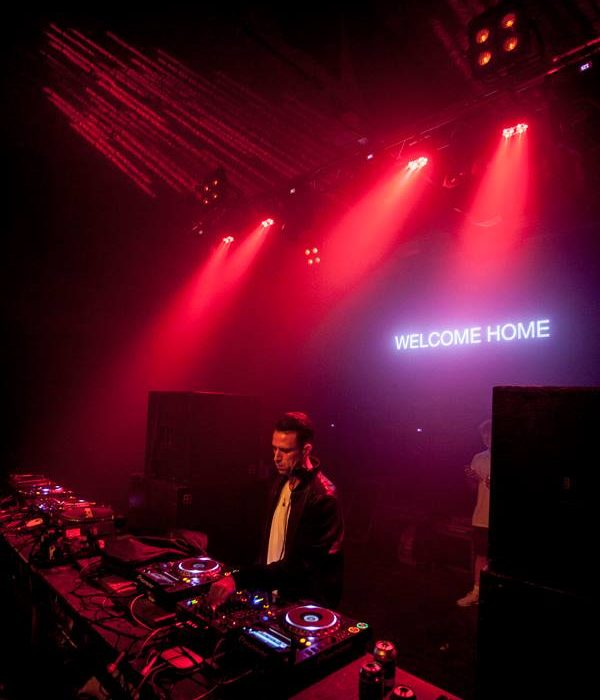 “Welcome Home” is the message emblazoned in light across the wall of Store Street upon entry. The smaller venue is a marked improvement on Victoria: the queue lasted a matter of seconds; there’s no one way system making you feel like herded cattle; and, considering the top to bottom strength of all WHP bills, only having to choose between two rooms is almost a saving grace.

Jackmaster is tasked with opening the night and season, commitments in London forcing the often peak-time party DJ into an unusually early slot. The Glaswegian does a fine warm up job as the room gradually fills. Selections such as Ricardo Villalobos’s ‘Enfants (Chants)’ set a euphoric tone for the night, and the airing of a rare James Brown white label edit – ‘Tell Me (Blue Boy Edit)’ – is a particular treat. By the time he closes on Prince’s ‘Controversy’ there’s a sizable crowd in attendance and the party atmosphere is in full swing.

Leon Vynehall steps up next and spins a set of soulful house – aurally delighting, whilst retaining a strong sense of danceability. Opting to play Four Tet’s ‘KHLHI’, with its chopping between thumping percussion and rich vocal samples, being a prime example. It’s a style that Vynehall has honed well in his own productions, a number of which he seamlessly blends into the mix. The lush orchestration of ‘Butterflies’ and swelling synths of ‘It’s Just (House of Dupree)’ provide set high points.

As the doors close at 10:30pm and the room hits full capacity, Vynehall really pulls it out of the bag. In the final half hour he drops one of my all-time favourite tracks ‘OAR003-B’, before closing triumphantly on Floating Points’s future classic ‘Vacuum Boogie’.

Carl Craig ups the intensity considerably as he takes to the booth. His set is characterised by moments of clarity emerging from a wall of ferocious percussion. Whoops ring out and fists pump as the Detroit techno is pounded out forcefully: Jeff Mills’ ‘The Bells’, Craig’s own remix of ‘Use Me Again’ and Floorplan’s ‘Never Grow Old (Re-plant)’ all cause chaos in the main room.

Next up, Tale Of Us provide the only disappointment of the night. Their formulaic set of intricate melodies layered over repetitive build and release basslines quickly grows wearisome, feeling particularly insubstantial after the vigour of Carl Craig. Fortunately, respite is readily available in Room 2 where Harri & Domenic are throwing down house classic such as Inner City’s ‘Good Life’.

It’s there that Ben UFO b2b Pearson Sound close the night. The Hessle Audio honchos share the decks expertly, kicking the room into action early on with two Barnt tracks – the siren-esque synths of ‘Under His Name But Also As Sir’ act like a warning to strap yourself in before the hammering percussion of ‘Chapell’ is unleashed. The pair then plot a course through unrivalled cuts of house, techno, garage and bass; things even got ghetto with Bok Bok & Tom Trago collaboration ‘Pussy Trak’ and Marquis Hawkes’s ‘Outta This Hood’  providing stand out highlights.

The Warehouse Project certainly does feel right at home at Store Street, and they deserve credit for returning to the smaller, undoubtedly less profitable venue. Don’t miss out on this one season event.