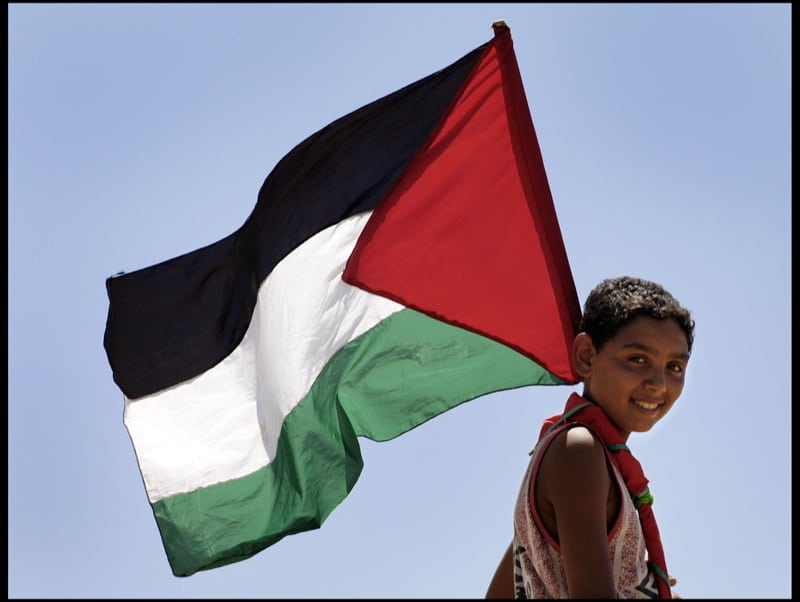 A child carries the flag of Palestine. Photo: rustystewart @Flickr

Should we criticise Israel?

It is difficult to separate the past and the present in a meaningful way and still come to a compassionate and effective conclusion. If you keep going back in time you will come to a point where one ape encountered another at the boundary of a forest: there they diverged, never to meet again, until one’s group stormed in on their cavalry, or flew down in their hellish metal birds.

Fortunately in this extremely complex conflict, there is at least one sensible checkpoint: the creation of the State of Israel.

Israel was formed on a “land without a people, for a people without a land.” This statement is almost comical now but has unclear origins. There is contrasting evidence as to where it came from, but there is definite evidence it was used by high-up individuals in the Zionist movement in the 19th and 20th century. This attitude leads us into why Israel should be criticised.

The state was founded either on the idea that Palestine was empty or it was not. In the first instance the obvious disregard for Arab lives is clear. The second instance is far worse in the sense that there is no room for excuses, the claim was clearly that the Jewish Diaspora’s security was more important than the lives of the Palestinian nomads who had lived there with their families for generations. The evidence points to the second option, as Ben Gurion, the country’s first leader, was very keen to see all the Arabs leave and their villages destroyed.

I appreciate that this is not the Israel-Palestine conflict in its current form, but the conditions set at the origin of this new chapter are important in setting the tone of the conflict. One important thing is that for all the victim narrative you hear from Mr. Netanyahu nowadays regarding the behaviour of Hamas is that at a lot of points since the start of the territorial conflict, Israel have had the initiative. They were the ones in power, and this is the crux of the issue; those with the power have the higher moral responsibility to end the conflict.

For a people who have been at the receiving end of such hatred and violence, it is understandable some of their leaders act so vengefully, but it is also disappointing that they lack the compassion and solidarity with their fellow man. It is so much easier to understand this when you stop thinking about this issue from a religious or ideological standpoint, but from an economic and class one. Israel is now firmly in the driving seat when it comes to peace. If I were in their position, I would go about “peace” very differently.

The idea of an occupied state is the spiritual successor to how the Palestinians were removed from their homes originally. It is illegal by international law to occupy territories which are not yours, and at this point a lot of people simply disagree on whose the territory is. It is the most humiliating type of autonomy, that which is constantly overseen.

The worst actions were those of compulsory transfer—the idea that Arabs were to be asked to leave Israel, and if they did not, they would be forced. The idea of Israel existing was simply more important than the lives and families of those Palestinians who lived there. This is the height of opportunism. This was allowed to happen internationally because of people like myself, so fixated on a tabula rasa state for the oppressed, such a romantic idea, so dreadfully conceived and executed.

I hope I would have been horrified as I saw one people find a home, amidst the burning ruins of another’s.

We see the collective punishment of Palestinians, a war crime which has been observed in Gaza City especially. The only defence of these war crimes is that the Palestinians legitimately elected that which is now considered to be a terrorist organization by most of the world.

Bringing up that Hamas fires rockets is to do two things. It is to attempt to conflate Hamas’ actions with those of Israel and it is to find someone to deflect blame on to for the mass murder of civilians, including children. There is absolutely no excuse for the murder of any child in Palestine and to call it collateral damage is sickening. If I were in a war I thought to be legitimate, I would be grovelling at the knees of my enemy for forgiveness for such an act. I have heard the ludicrous point that Israel are being punished for being good at war; if they were that good, then they would not be killing civilians.

Ethnic cleansing is the systematic removal of an ethnic group to make it more homogeneous to the cleanser’s ethnicity. The conflict in Palestine has too many characteristics shared with this definition not to be regarded as such any more.

An edited version of this original piece appeared in this week’s edition of The Mancunion. We apologise if any misinterpretation occurred or offence was caused by the edit.

No community or country in the world would or should silently resign to missile attacks and ceasefire violations. According to the UN charter, every nation has the inherent right to counter attack in self-defence against aggression. Israel should not be condemned for simply refusing to be subjected to another Holocaust.

Israel is seen as an oppressor in a region where it is the only free democracy and is constantly imperilled by religious and racially motivated attacks on its population. Israel has agreed to various ceasefire agreements, many of which have been wilfully rejected and violated by Hamas.

Over 13500 rockets have been launched from Gaza into Israel since 2001, resulting in Israelis living under constant harassment and needless defence expenditure on Hamas’ war. The media has made us forget that Israelis are threatened; we see no ‘Israeli death toll’ or reports on the persistent building of tunnels with the express purpose of killing more Israelis in mainstream media, because for some people the same principles of humanity do not apply whilst talking about the two sides.

The cycle of provocation followed by playing the victim after Israeli counter-attack is abhorrent. Israel has accepted the establishment of a Palestinian state as the solution to the ongoing conflict and as a basis for future peace but the Palestinian Liberal Organisation (PLO), which is considered to be the official representative of the Palestinians, and Hamas, which was voted to power by Palestinians in the last legislative elections, were founded and run with the aim of death to Jews.

These anti-Semites do not understand that the destruction of a country that has been set up by the UN and accepted by the world community is not only against international laws but is also impractical. 6.3 million Jews who have lived in the same region since before 1948 are not encroaching and will not just pack their bags and leave because some people cannot digest the fact that an Abrahamic religion other than Islam could hold Jerusalem sacred.

“Heartless monsters” and “cold-blooded murderers” are some of the phrases used to describe Israel-supporters. I want to question what really constitutes inhumanity to these self-proclaimed defenders of human rights.

It is monstrous when children are taught to hate a people from birth. It is despicable and explicitly criminal when Hamas fires rockets from schools and hospitals and gives Israel no choice other than to retaliate, then takes photos of the burnt bodies of those they have indirectly murdered to further a propaganda war.

The Israeli military acts on the principle that it is ethically detestable to kill non-combatants in a fight. Hamas acts on no such principles. I would like to quote the events of the second Intifada, where Hamas members strapped explosives to their bodies and, disguised as women and children, went into highly populated civilian areas and detonated the explosives.

An anonymous Russian commander fighting in the Mujahideen once asked, “How do you defeat an enemy who looks into the barrel of a gun and sees paradise?” These words ring with palpable veracity in a conflict where it is a fact, not an opinion, that Hamas will not stop killing Israelis until they obliterate Israel or Israel obliterates them.

One may argue that the blockade perpetuates the conflict but Israel should not, and will not, lift its blockade until there is a guarantee that Hamas will not, as throughout history, use these resources explicitly and solely to construct further means to attack Israel. Unfortunately, due to the rhetoric Hamas incessantly espouses, this guarantee is as fanciful an idea as Atlantis or there being a big block of cheddar under the surface of the moon.

Political stability in this region has significant consequences because Israel, even as a non-natural resource dependent country, has focused on economic growth and thus has the highest Human Development Index ranking in the Middle East (even ahead of the US). On the other hand, by the use of slogans such as “We love death more than the Jews love life”, Hamas sets an example about what happens when the destruction of another nation becomes your national goal; supporting Hamas is supporting genocide.

The attempt to pass the guilt on to Israel for their inability to progress seems dubious when on countless occasions Hamas has hindered the UN humanitarian actions in Palestine.

How appalling of Hamas to blame Israel and claim the sympathies of the international community when it has gone to the extent of employing violence against UN staff and attempting to assassinate the former UNRWA chief—twice. Hamas does not work for the good of Palestine as it claims, a dozen times more resources are used towards the destruction of Israel than go towards the welfare of the people and the economy.

It is hypocritical of Palestine, a religious state itself along with other states in the region, to dispute the claim of Jews to live safely and freely in a Jewish state. Israel has a right to self-defence and has been defending itself since the foundations of the country were laid. Israelis are not the aggressors in this war, they are purely retaliatory.

This community does not deserve to be criticised for refusing to quietly accept yet another attempt at ethnic cleansing, nor be vilified in a war that is solely a direct result of Hamas’ despicable rhetoric.