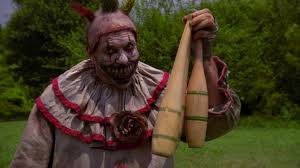 In our supposed ‘Golden Age of Television’, you can always count on the small screen to provide solutions to the problems on the silver screen. That’s where the wickedly brilliant and brilliantly wicked anthology show that is American Horror Story comes in—but it’s not so much a show that’s defied cliché, no, it’s even better than that. It’s one that makes intelligent use of cliché; if a show were to purposely avoid cliché, it would become predictable through our constant expectation of the unexpected. In American Horror Story, we truly never know where the plot is going to take us next.

Season One of American Horror Story, retrospectively subtitled Murder House, throws us straight in to the show’s twisted world. With a story featuring infidelity, ghosts, devil-children, teenage suicide and psychiatry—often in the same scene—you won’t be able to stop watching. Even at the most skin-deep level imaginable, it gives us a look at how warped human nature can be.

The next season is subtitled Asylum. Set back in the 60s, we’re dragged screaming into a mental asylum run by the Catholic Church. With gorgeous period detail, Asylum’s plot provides us with a chilling but thoroughly engrossing story featuring demonic possession, Nazi war criminals in hiding, alien abductions, twisted science experiments and the strangely soothing presence of the Angel of Death.

Coven is next on the agenda, which puts us into the world of a school for witches that isn’t called Hogwarts. While I’d argue that this season is a slight step down in quality from Asylum, it still has everything that makes American Horror Story great going for it. With a plot about modern day witch-hunts in the mix, you just can’t say no.

American Horror Story’s fourth season, Freak Show, featuring a killer clown and Jessica Lange’s rendition of Life on Mars, is currently being broadcast here in the UK on Fox HD. Those of you yet to watch the show can catch up with the first three seasons on Netflix.