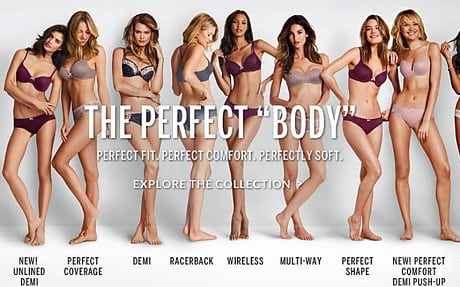 In present day, we are definitely moving away from this toxic way of thinking, encouraging people of all shapes and sizes to be happy with the way that they look. Keira Knightley recently released images from a topless photo shoot, demanding that her body not be edited in any way once the photographs had been taken. Throughout her career, people within the marketing industry have enhanced her chest without any consent, leading her to question what was wrong with her body in the first place. Proud of her smaller chest, the topless photo shoot was an important message to be shared. We have come so far in spreading the message that your body shape does not define you: enter the Victoria’s Secret ‘Perfect Body’ campaign.

The campaign’s aim was to promote their range of underwear ‘Body by Victoria’. Irresponsibly, they did so by stretching the words ‘The Perfect Body’ across ten thin models. The harmful message that this advertisement displays is that we should not be happy with our bodies unless we look like a Victoria’s Secret model—which isn’t even possible! They starve themselves and exercise manically in the days running up to a photo shoot, meaning that not even the models look like that normally. On top of the unhealthy lifestyle that these models are condemned to, any further blemishes and imperfections will have been removed via Photoshop.

Some people have responded to the campaign by saying that they should have used larger models instead—but would this really have been better? We can see in the music industry at the moment that artists are attempting to promote bigger body shapes (Meghan Trainor with ‘All About That Bass’, and Nicki Minaj with ‘Anaconda’), which is fantastic, but they are definitely going about it in the wrong way. Instead of spreading the positive message of loving your body no matter what shape or size it is, they have taken the opposite route to the Victoria’s Secret campaign, by shaming smaller women instead. Instead of body shaming at all, we should be body celebrating. We shouldn’t be claiming that a real woman has curves, or that she has muscles, or that she is skinny—a real woman is whatever the hell she wants to be, and the marketing industry has failed us once again at promoting this message.