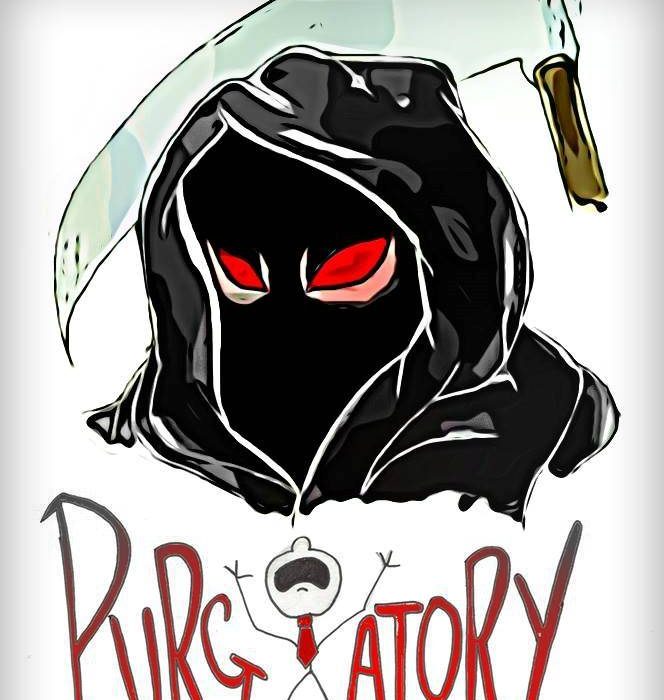 A fast-paced, exhilarating performance graced the stage of The Martin Harris Centre on the opening night of Purgatory. I had the privilege of seeing the play in progress as I filmed behind the scenes and interviewed the cast and director, Rob Paterson, during one of their rehearsals for FuseTV.

It was a new experience for me to see the process of what Rob envisaged, and the messages he wanted to portray to the audience, come to life onstage. There was a heavy use of props and the focal point was a projector that projected images and videos onto a large screen upstage, which the actors interacted with in various ways. Having not seen this in rehearsal, the technological element of the performance certainly added an interesting and ambitious aesthetic. The scenes I watched in rehearsal, with the added dimension of visual and aural technology, were made all the more engaging and impressive.

The play focused on the protagonist, John, who suffers from hypochondria and experiences events that seem to be either unlucky coincidences or just a figment of his paranoid imagination. Even the first scene where John gets shot by a co-worker, which sparks off various flashbacks that construct the rest of the play, is later questioned as to whether or not it really happened.

Throughout, questions about morality, reality and mortality are raised; John is portrayed as always having these doubts ever since childhood. The protagonist also grows more distrustful of religion, likening God to a ‘placebo’ effect; the play is unafraid of critiquing the hypocrisy religion incites for John. This complex character was taken on flawlessly by actor, George John, who gave a truly commendable performance. The rest of the cast executed their multi-roles effectively, each embodying the character of death, bringing John’s anxieties surrounding his own death closer to home, and closer to the audience.

Rob talked to me about inspiration he took from films like Scott Pilgrim vs. The World, and this influence is clear to see, as several scenes in Purgatory are set as if it was a video game where the aim was to win against death. The light-hearted moments of the play complimented the more sombre and action-filled scenes well. The comedic and absurdist element boded very well with the audience even though the play is primarily about the decline of John’s sanity and rationality—a very serious issue, indeed.

I hope the ambitions Rob and the cast had have been surpassed by the fantastic and gripping performance delivered. It has been a truly unique pleasure, from an outsider’s perspective, to have had a glimpse of the journey from rehearsal to performance.