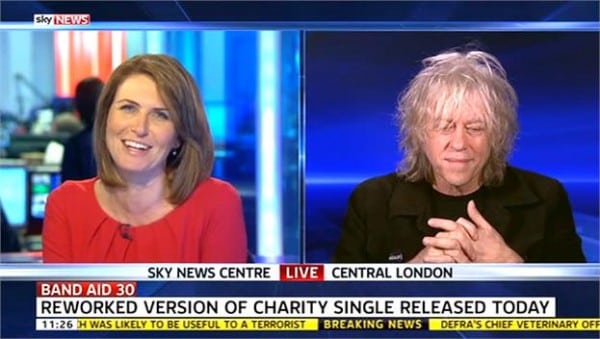 Opinion: Bob Geldof – Should He Give Up, Or Should He Just Keep Chasing Payments?

When Sky News presenter Jayne Secker aired suggestions from critics on social media that if some, or rather most, of the musicians who recorded the Band Aid 30 single ‘Do They Know It’s Christmas?’ paid their taxes in the right way, this sort of single wouldn’t need to be made, Bob Geldof’s rather colourful response was to suggest that they were talking “bollocks.” What Geldof took as chastising victimisation, Secker highlighted a perfectly valid and legitimate point, but seemingly all discussions about ‘Do They Know It’s Christmas?’ have been centred on these political and moral contexts, which should always be treated with the greatest respect, consideration and sensitivity. However, as this is an opinion article, this is what I have to say:

While it may be all good and well for Geldof to retort “bollocks this” and “bollocks that” to any form of criticism, constructive or not, he just does not seem to be taking any of it on board. Time, they say, is the greatest gift a person can give, but what Geldof is asking for is not our time, he’s asking for our money. If we say no and don’t buy the song, do we therefore not care? Of course we care. Giving money to a worthy charitable cause isn’t necessarily the issue, as we Brits, generally speaking, are a very generous bunch. The issue I have is the pretence and hypocrisy from Geldof and co. that have finally poked and prodded our conscience to question why we should hand over our money on the demands of a man worth an estimated £32m.

I for one feel rather uneasy handing over my hard-earned money, especially as a working student, because multi-millionaire singers happened to give up a few hours of their time on a weekend to record a song that still isn’t right at the third attempt.

In West Africa, where the Ebola epidemic is concentrated, a different song is gaining attention. Some of West Africa’s most famous musicians have joined together to make their own Ebola appeal song, ‘Africa Stop Ebola’, with profits going to Médecins Sans Frontières, the non-governmental humanitarian aid organisation who have been on the front line since the outbreak started earlier this year. The lyrics of the song are meant to educate Africans about the disease, as opposed to Band Aid’s ‘one song fits all humanitarian crises’ model.

Band Aid seems to portray the whole of Africa as a place where the only bells you hear are those of doom and despair, so while the initial idea to bring out the song, again, is commendable, scratching beneath the surface reveals how trivial and out of touch with the crisis it actually is. The debates about Band Aid haven’t focused on the Ebola crisis, instead, the petty side dramas have grabbed the headlines, most notably the dispute between Geldof and Adele, who perhaps quite rightly, didn’t take part in the recording, instead choosing to make a charitable donation on her own terms. The Band Aid crew need to put their money where their mouths are and follow suit.