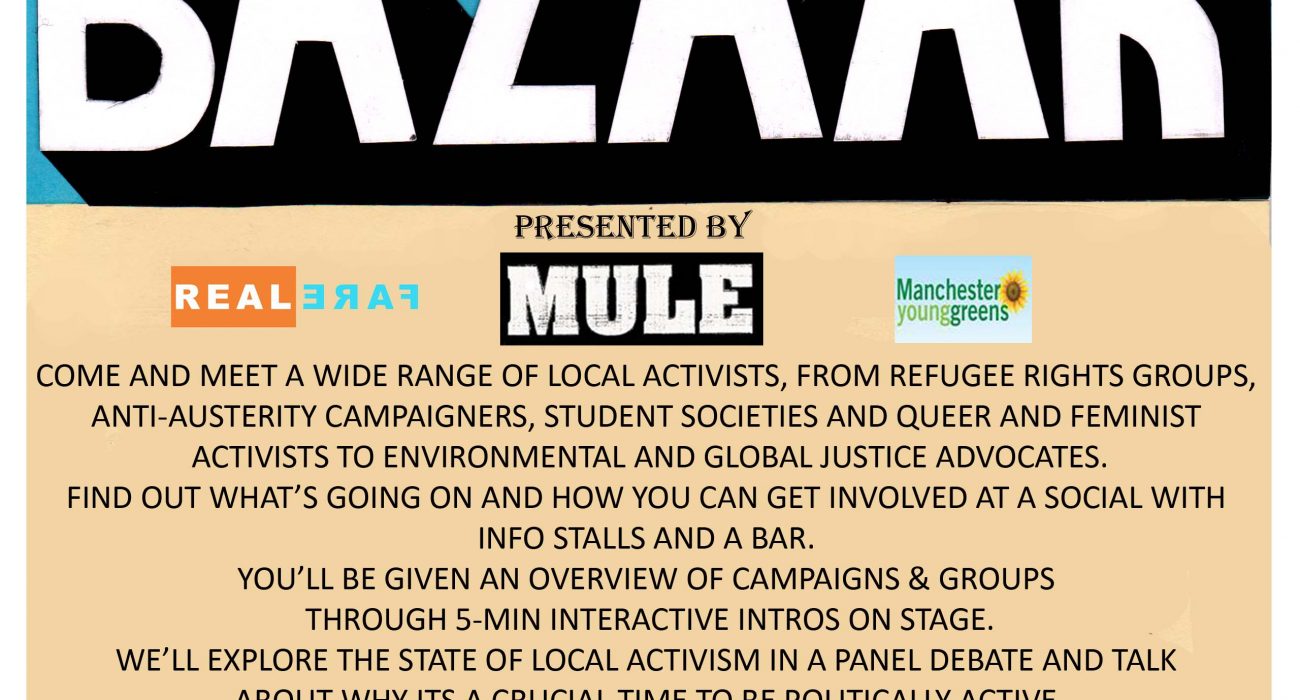 Manchester Campaigns Bazaar: ‘Local Activism in the Age of Austerity’

The Greater Manchester Campaigns Bazaar which took place last Thursday was an opportunity for campaign and community groups from across Manchester to get together in one space and to build their profile and gain support.

The Bazaar showcased just how many diverse campaign groups exist and are taking action across Manchester.

University of Manchester student societies were also involved with campaign groups such as: Save Our NHS Manchester, Manchester Young Greens and Living Wage campus campaign.

The main event of the night however was the panel debate, titled ‘What’s Left? Local Activism in the Age of Austerity’.

On the panel chaired by Kevin Gopal, editor of The Big Issue in the North was Women’s Officer Jess Lishak, Stephen from World Development Movement, Steve from Salford Star and Penny Hicks from the Manchester People’s Assembly against Austerity.

The panel explored the state of local and national activism, questioning first whether they were optimistic about the state of the campaigns and movements against austerity and cuts.

This led to a discussion as to whether the plurality of the left wing campaign movement against austerity was a good or bad thing.

The general consensus was that the diversity of the discourses of left wing campaigns is an integral part of the movement.

However Penny Hicks suggested that for the issues raised by the campaigns bazaar to have a real political impact they would have to find some form of unity on one or two key issues.

Penny celebrated the fact that so many students are showing solidarity with strikes and campaign action across Manchester. She commented that it was a new thing and should be replicated, the unity of movements should spread.

The panel also debated, in response to a question from the floor, the role that social media plays within this generation of campaigning.

The panel’s consensus was that social media is an essential tool to spread the messages and get people listening, however it cannot be the only tool.

Finally it was also posed how the panel felt was the best was to get responses from politicians.

Jess stressed that registering to vote, even if to only spoil the ballot paper, is essential in order to get even recognition from politicians. She argued that no one will listen unless they believe they are accountable to you.

A video of the panel debate will available to view on the Mule website shortly.