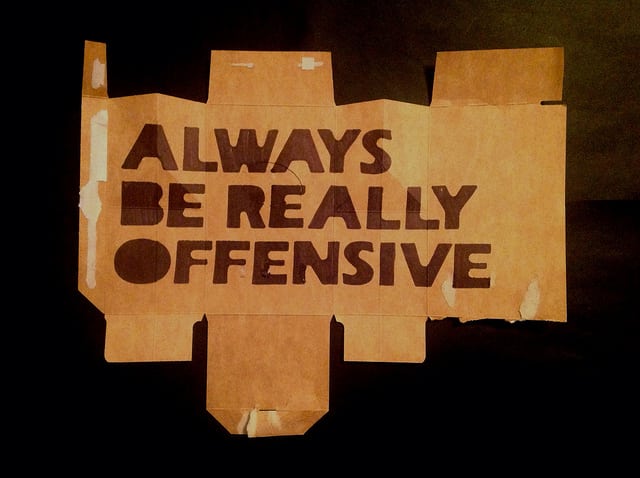 Stop hiding behind political correctness and just admit you're being offensive. Being offensive is fine in comedy, but not in serious debate. Photo: alshepmcr @Flickr

Chances are if you disagree with me, you’re just “saying what everyone else is thinking,” you’re worried about Christmas being banned, or you’re annoyed that you’ve offended someone—or you’re Nigel Farage.

Perhaps instead you’re just a devout advocate of unrestricted freedom of speech without conscience; it doesn’t really matter. The concept of political correctness only exists in the mind of those who want to criticise it, and even if it existed independently of its detractors—and UKIP—it would not contravene freedom of speech.

The inability to call someone a “faggot” or to use racially insensitive language is in no way an attack on anyone’s freedom of speech. It’s not political correctness to avoid using terms like this, nor do those who avoid them because they’re offensive wake up in the morning and prepare their straitjacket of correctness for the day.

Offending someone is offending someone. Importantly, no one other than the marginalised groups being offended are permitted to decide what is or isn’t offensive. A straight man isn’t allowed to tell me that I shouldn’t be offended when someone calls me a “poof” or puts gay marriage in scare quotes. As a white male, I’m not allowed to decide what terms to use to call black people or to call women, and so on.

Not being offensive isn’t hard, nor does it detract from your opinions, however backward, in any way. Intelligent debate about immigration, gay marriage, or any topic you could possibly imagine, can be talked about without offending people.

Comedy is an exception. It’s a blurry line between acceptable offence and just downright tastelessness but no one really knows where the line falls—it’s an undefined line that Dapper Laughs definitely crossed.

Not being offensive does not equate to censorship; for example, saying “AIDS” rather than “full-blown AIDS” doesn’t censor any ideas or opinions put forward in an argument.

We all have the right to an opinion, and the right to criticise anything. But you don’t need to be offensive and everything can be debated in polite, inclusive, terms.

We should stop blaming political correctness every time we offend someone, and just call it not being an arsehole.