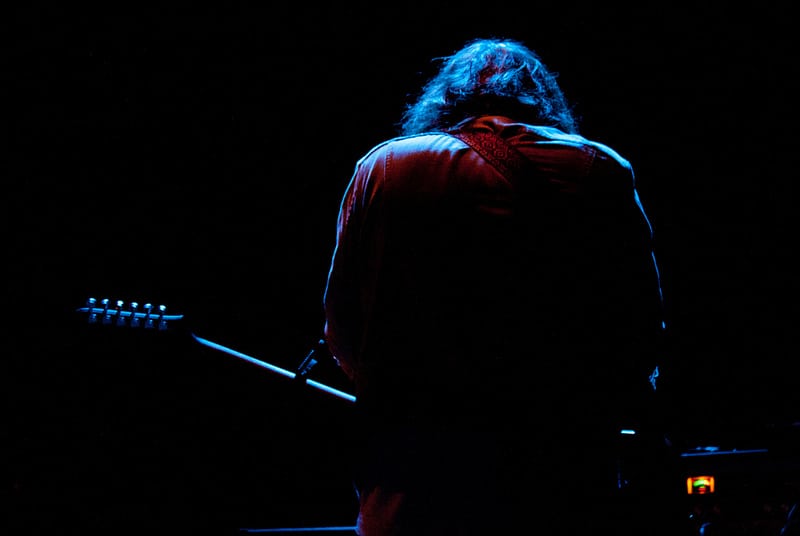 Live: The War On Drugs

The American dream. That great inescapable theme of literature, music and teenage fantasies. To capture the essence of endless hope, choice, promise and possibility is a powerful thing indeed. Every review of The War on Drugs draws the obvious comparisons to Bruce Springsteen, Bob Dylan, Tom Petty and Neil Young, but to state this without highlighting how intentional it is misses the point. Adam Granduciel deliberately sticks pins in the map of American musical history and draws a contorted line to his own music, subverting the traditional dream to make a sound that is nostalgic, sad but hopeful all at once. Even the name ‘The War on Drugs’ hints at the broken dream that is Americas disastrously failing drug policy.

I’ll admit I am the perfect audience for this concept. I grew up on Bruce and Petty, I share Granduciel obsession with Dylan. I love the American dream and the broken dream, I love Steinbeck, talking about conspiracy theories about American political corruption. I don’t care if its cheesy, I love it all, even the keyboard nod to The Eagles/Dire Straits. I’ve been waiting for this band for years.

But Granduciel has made new album Lost in The Dream different and clever and more universal than my American classic rock love. Granduciel wrote Lost in the Dream after a well documented breakdown; his sadness on the record is tangible but also disarmingly relatable, therein lies the universality that past albums lacked.

The lights dim to reveal an unashamedly, brashly Springsteen style stage backdrop: old school ‘high school football tournament’ flashing lightbulbs line the stage and illuminate the catchy, punchiness of opener ‘Burning’. A few songs in, I spot the silver glint of light reflecting from a harmonica and shudder; there are few things more awful than a bad Dylan impersonation, any Dylan impersonation actually. But Granduciel made it completely his own.

The only negative of the evening was the over-the-top reverence of the crowd. Perhaps a result of the hype generated by Lost in the Dream, most people swayed slowly in silent awe throughout the evening in a fashion befitting the church venue of the Albert Hall but not necessarily songs like ‘Under The Pressure’. Although as the lights dimmed to sunset red for a breathtakingly perfect version of ‘Set Your Eyes to The Wind’, this reverence did seem fitting for an almost perfect evening.