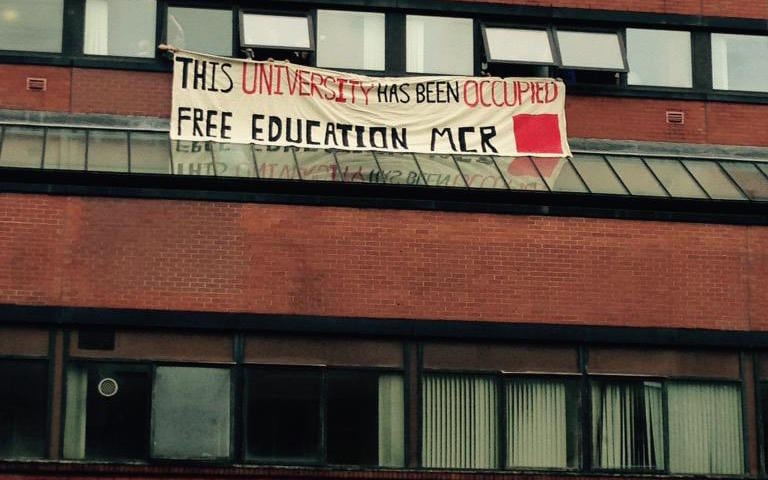 The banner announcing the occupation has been displayed on the side of MBS. Photo: Peet Earnshaw @Twitter

A group of around 30 protesters representing the Free Education Mcr campaign have begun an occupation of the Harold Hankins building in Manchester Business School, to protest fees and cuts, and what they refer to as the university’s “encroaching neoliberal attitudes.”

The occupation began at 3pm yesterday, with campaigners claiming the fifth floor of the building, which is part of the Manchester Business School.

In a statement released on their Facebook page at around midnight, the occupiers said: “The University of Manchester is in occupation. We are occupying because we know what five more years of a Tory government means. It means the hopes of millions of young people and workers shattered by cuts and privatisation. There is talk of another rise in tuition fees, funding apprenticeships through 24% cuts to further education, and scrapping the disabled students allowance once and for all.

“We know what the market does to education, and we know we need to fight it. We are occupying to reclaim space from the university’s corporate projects—and to use it to educate ourselves freely. The area we are in is being redeveloped into a £50m hotel and ‘executive education centre’. We are occupying to begin to create a space where we are more than customers, and education is more than a business.”

Earlier, they claimed that university security was preventing any more students joining the protest, and that no food was being allowed into the occupation either. “We condemn the university attempting to starve us out of the occupation rather than let us use what is supposed to be our own space for our own education,” reads the statement.

They have plans to remain in occupation indefinitely, and are claiming on social media that locksmiths, police, fire services and workmen have been called to attempt to bring the occupation to an end.

A spokesperson for the University of Manchester said: “The university supports the right of anyone to demonstrate peacefully within the law; however, the occupation of university buildings disrupts the daily running of the institution.

“A number of students are occupying a room in the Harold Hankins Building and are free to leave anytime they wish.

“The university has made an offer to the Students’ Union that members of its executive will be allowed to deliver food to the protesters and check on their wellbeing; the students already have access to fresh water.

“In order to ensure the health and safety of everybody in the building, the university has informed the protesters that appropriate staff  may require access to the room to conduct checks and assessment.”

In response to accusations of disruption to the university, the campaigners said on their Facebook page: “This is why we’re in the Harold Hankins suite, a disused part of the shopping precint/MBS which the university is planning on converting into expensive hotels at a cost of £50000000.”

A further statement, released at lunchtime today read: “The university have plans to renovate this section of the Precinct [Shopping Centre], and turn it into a luxury hotel. This is symbolic of their encroaching neoliberal attitudes to threaten our education. And we are combating it through protest for free education—financially free, liberated and democratic.

“We intended to practise our vision of this free education with the space. But the University are making this impossible – they are prohibiting open access. We cannot get in and out of the building. Food cannot be delivered to the building. They are trying to starve us out.”

They have also encouraged supporters of the movement to contact the Vice-Chancellor of the university, pressuring her into allowing the provision of food and free movement to occupiers.

A list of demands, released at 4:30 this afternoon, can be read in full here. The demands encompass support for free education, liberation, democracy in the university, and workers’ rights. Some of the main points include no cuts to the access programmes offered by the university, a living wage to be paid to all staff, no cuts to the Manchester bursary, and no more zero-hours contracts for staff members.

This comes after occupations at other universities across the country, such as LSE, University of the Arts London, and Lancaster.