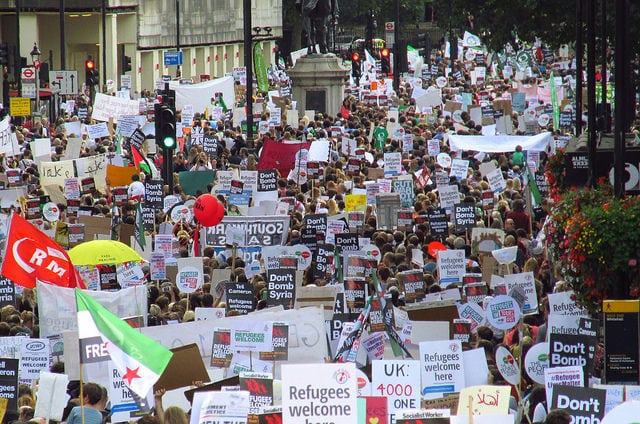 Thousands have turned up in solidarity with the refugees at marches across the country. Photo: zongo @Flickr

As the global refugee crisis unfolds, reports show that Greater Manchester is doing more to house and care for asylum seekers than other region in the UK.

The Manchester Evening News recently published a series of reports based on Home Office data showing that the North West region takes approximately one in six of all asylum seekers in the UK.

The report shows Rochdale and Bolton alone taking a combined figure of 2024 refugees, a figure far exceeding the 1617 refugees taken by London and the rest of the South East.

Reaction to this news has been varied. Many have criticised the unequal distribution, claiming that wealthier areas of the country should do more to house those in need.

The Labour MP for Rochdale, Simon Danczuk, said the report highlights that the North West is taking a “disproportionately high number,” claiming that other regions of the country were “not pulling their weight.”

However, Labour MP for Manchester Central Lucy Powell has welcomed the news stating that she thinks there is a “moral obligation” to do more for refugees and that in her view the “vast majority of Mancunians would welcome playing their part.”

The report comes as the Prime Minister announced earlier this month that the UK would take a further 20000 Syrian refugees over the next five years. Cameron’s position contrasts strongly with Germany, where some 20000 refugees have been granted asylum over one weekend this month.

Popular support for refugee rights movements and rehousing projects have been widespread in Manchester. On the 12th of September hundreds of people rallied in frustration at Cameron’s proposal to take 20000 refugees over five years. Manchester also saw massive counter-demonstrations against far right, anti-immigration, anti-refugee groups including The Far Right Infidels and Combat 18 this August.

Sir Gerald Kaufman, Labour MP for Manchester Gorton and the longest-serving current MP, told the House of Commons that if MPs didn’t let more refugees in now they would “live to regret it” for the rest of their lives.

The leader of Oldham council has also condemned Cameron’s stance as “shameful and embarrassing.”

Many students angered by the government’s weak response to the crisis have taken matters into their own hands signing on to Student Action for Refugees (STAR).

Emily Crowley, Deputy Director of Student Action for Refugees told The Mancunion: “The world is facing the biggest refugee crisis since World War II and the UK government is simply not doing enough.

“If you want to make sure the UK welcomes refugees take action with STAR to campaign for increased resettlement of Syrians and safe routes to the UK for refugees. You can also provide a welcome for refugees in your local community by volunteering with STAR to teach English and much more. Together we can get the message out, Refugees Welcome Here!”

Michael Spence, Education Secretary at the University of Manchester Students’ Union told The Mancunion that the government’s response was “pathetic.

“We have a duty to take in far, far more; especially considering Britain had a hand in creating the crisis by constant interventions in the Middle East. Students should do everything to lobby MPs and the government to support taking in more refugees.”