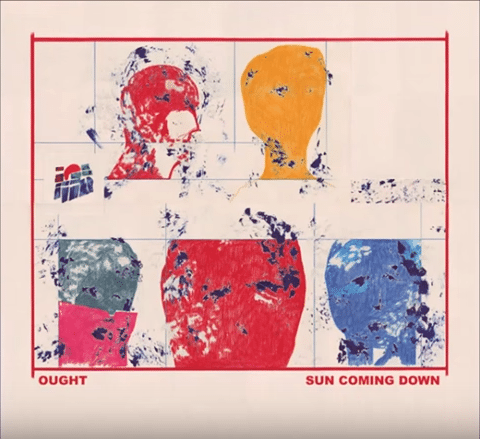 Ought: Sun Coming Down

Ought are a lazy music journalist’s wet dream; “they sound like David Byrne had a child with Mark E. Smith and hid it for 30 years in Thurston Moore’s monitor amp.” Add between three and five more comparisons, and recommend that any self-respecting post punk fan buy their discography immediately.

But part of what makes Ought stand out from the mob of artists trying to gain such praise, is that they are more than the sum of their influences. Sure, the vocal delivery of ‘On The Line’ is reminiscent of Smith’s, the lyrics on ‘Beautiful Blue Sky’ sound like something Byrne could have written, and the electrical storm of guitars on ‘Men For Miles’ suddenly swallows the elsewhere-stabby instrumentation in the same way that Moore’s guitar work can. Yet, at no point do they sound like songs by The Fall or Talking Heads or Sonic Youth.

Ought’s debut last year established a distinctive and fully-formed sound and, unsurprisingly, given that it follows hot on the heels of its predecessor, they are working with the same pallet on Sun Coming Down. There is still tight interplay between the rhythms and counter melodies of the drums, bass, guitar and organ. This is particularly pleasing in the uncharacteristically pretty ballad ‘Passionate Turn’. Each element is equally weighted in the mix and there is no extra instrumentation, giving them a raw, live feel. This is compounded by the jammed-out noise sections such as those on the title track.

As on the debut though, the star of the show is vocalist Tim Darcy; he’s blasé one moment and intense the next, listing dull conversational topics as if they’re sources of inspiration and barking common idioms for seemingly no reason. Their comic appeal is upped from the debut, but not to the point where it comes across as contrived; rather, Darcy sounds more confident, as if he isn’t holding back.

I’m often dubious of quick follow-ups, but spontaneity suits Ought’s style. Sun Coming Down is not as well put together as their debut and by track seven I was begging for some variation. However, ‘Beautiful Blue Sky’, ‘Men For Miles’ and ‘Passionate Turn’ are amongst their best work yet. It’s the sound of a band that is totally comfortable within its own skin and that is too excited to stay still.