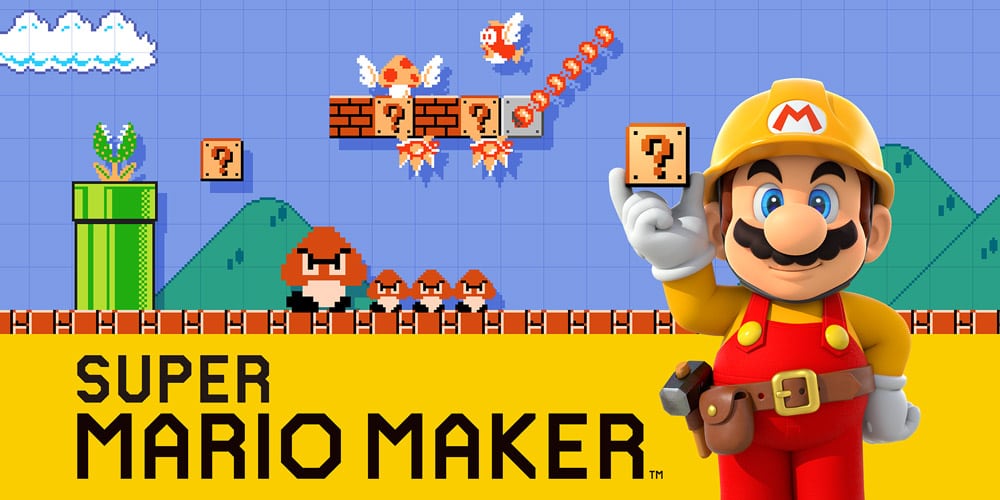 This year is the 30th anniversary of Nintendo’s portly plumber. To celebrate the Big 3-0, Nintendo have decided that, rather than just re-release a collection of Mario’s old games on disc (like they did five years ago with the Super Mario All-star: Anniversary Edition), they will allow the fans to create their own Mario adventure and craft their own experiences using the assets of Mario both old and new, ranging from Super Mario Brothers on the NES, to New Super Mario Bros U on the Wii U. For what is, essentially, Nintendo’s big holiday game now that Star Fox Zero has been pushed back to Q1 2016, Super Mario Maker needs to have the selling power to really push the Wii U through this holiday season and to get Mario back on the minds of gamers.

The main mode of Super Mario Maker is the Create Mode. Using the Wii U gamepad, players can create their own Super Mario levels, to be enjoyed by players around the world. Unlike other level creation games such as Little Big Planet, Project Spark or the various modding and hacking tools people have been using online for years, Super Mario Maker is designed to be incredibly simple and easy-to-use. The interface is amazing, with every element clearly laid out, as well as giving players the option to customize the layout of your building blocks.

Thanks to the Wii U gamepad, creating levels becomes a thing of ease. Players can simply draw the ground in a fashion similar to the Stage Creation tool of Super Smash Bros for Wii U. Many elements such as blocks, ground and coins can be drawn into the game. Other elements like enemies and items must be dragged and placed individually, but how far the game allows players to experiment here is astounding. Super Mario Maker gives players the option to place objects inside other objects. For example, players can have a Lakitu that flies around the top of the stage throwing down Hammer Bros onto unsuspecting players. Or players can have Bullet Bill Blasters that fire Mushrooms instead of bullets.

As for the other four games, they are represented through the various game skins. Everyone has a different opinion on which Mario game they feel looked and played the best. Nintendo have decided to cater to fans by allowing players to change which game is being used as the basis for your levels. This does not just change things aesthetically. The entire engine changes to reflect that prior game’s properties. For example, if you use the New Super Mario Bros. U skin, then creators can utilize the wall jump and ground pound ability, something that cannot be performed with any other skin. Nearly everything reappears in the various skins even if that component did not appear in the original game. Bowser Jr. is the best example of this, since he has only appeared in the later Mario games. This means that the developers had to craft brand new assets for Bowser Jr. in the styles of the past games. This is done so that the player is not limited if they want to choose an earlier style, and it clearly shows the passion the developers had when designing this game because even the ‘newest’ assets look like they could have been a part of the original game.

However, not every feature is universal. Power-ups are generally exclusive to certain skins, like the feather in Super Mario World or the Super Leaf in Super Mario Bros. 3. This also doubles over for the amiibo costumes. In Super Mario Maker, you have 100 costumes that can be unlocked by playing the 100-Mario challenge or by tapping that character’s amiibo. These costumes come replete with new sounds and visuals, although they do not change any of the gameplay and instead act like the Mushroom power-up. However, these costumes are exclusive to the original Super Mario Bros. skin.

If you are not the creative type and feel that Super Mario Maker may not fit your play style, well worry not. Super Mario Maker’s second mode is the Play Mode, which allows players to connect to the Super Mario Maker servers and play any of the 68-pre made levels in the game, or alternatively, to play any level created by anyone else online. As with all user-created games, Super Mario Maker has its mixed-bag of levels, from auto-Mario levels, to recreations of previous levels or games, to really easy levels that someone made in 10 minutes, to kaizo-inspired levels. Some might be fun and some might be boring but Super Mario Maker makes it easy to try out new levels.

My main problem with Super Mario Maker is the Star System. I actually think it is ingenious in its purpose. Nintendo expected a massive flux of poorly-made levels taking up the servers, and so to counter this, ruled that players may only upload ten levels at first. To upload more levels you need stars and to get these stars people need to vote in favour of your level. The problem is that the star count is way too high. The first milestone to upload additional levels is 50 stars. Because of this, players may find it very hard to get through the ranks, regardless of how well-designed levels are.

There are some notable missing assets, such as slopes or Charging Chucks. However, the most painful feature missing is the checkpoint feature. Every Mario game has had checkpoints, but they are missing in this game and this creates massive problems with some levels online. Many well-designed levels can be very long in length. However, as a player, there is nothing worse than getting far in a level and then dying, only to have to start from the very beginning again. That makes playing through some levels a slog and it becomes completely understandable that long levels may end up getting skipped. If a level gets skipped then it is unlikely to receive a star and so you see the dilemma.

Nintendo could easily rectify this problem in a DLC update in the future. Super Mario Maker is a game primed for DLC and recent signs of the Angry Sun and extra amiibo costumes being found in the game’s data hint thus.

Despite my main issue with the game, Super Mario Maker is very well-designed and is a fantastic game. It is the perfect game to release for Mario’s 30th anniversary and I would recommend everyone pick it up. It is one of the best titles on the Wii U and hopefully it will inspire Nintendo to change up the Mario formula in future 2D Mario games.