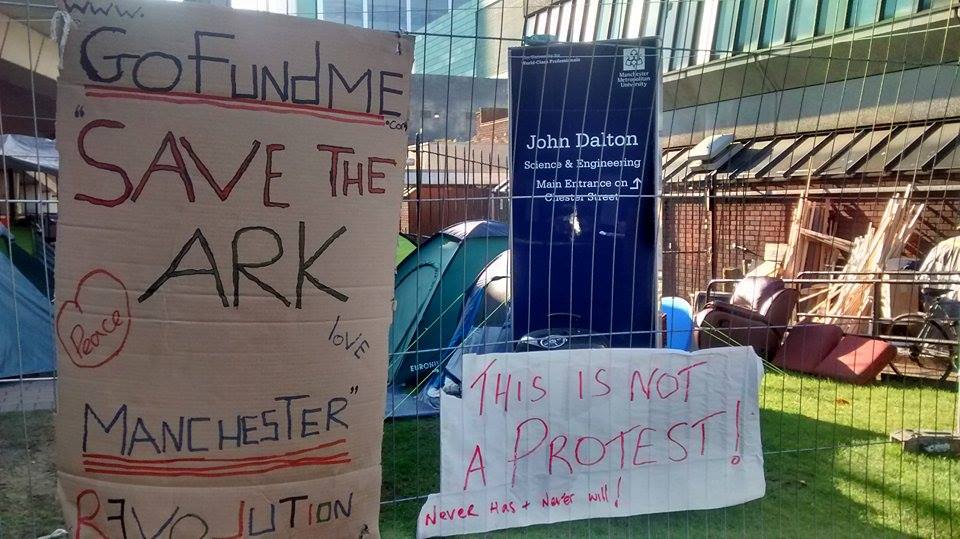 A judge has thrown out legal proceedings against members of ‘the Ark’ homeless shelter, and called the Council’s pursuit of a conviction “misconceived and inappropriate.”

Last week a judge granted Manchester Metropolitan University an order giving them permission to remove the camp, which they claim is on their property. On the 11th of September the camp was handed a civil eviction notice for Friday the 18th, and the residents were granted six days to protest the eviction.

The Council threatened them with two years in prison or a £5,000 fine for breaching a city-wide injunction which outlaws pitching tents in protest of the treatment of the homeless.

On Wednesday the case went to Manchester Civil Justice Centre for a final decision, but the legal bid was thrown out by a judge. The court decided that the rough sleepers and protesters would not be removed from their location.

Judge Allan Gore said the way the Council had presented its case was “fundamentally defective.” Dismissing the Council’s case, he said: “There is no dates, descriptions of behaviour or identification of which allegations are made against which defendant.

“That is a fundamentally misconceived and inappropriate way to advance criminal proceedings, where the Council seeks that the court orders to commit people to prison.”

Judge Gore also stated that the Council couldn’t even prove that some of the defendants had ever seen the injunction.

The application was then struck out and it was made clear that the Council must cover the defendants’ legal costs, which could reach thousands.

Solicitor Ben Taylor, acting on behalf of three of the defendants in the case, spoke to Manchester Evening News and warned that the Council could still take action against those breaching the order again.

“The application to commit was dismissed on procedural grounds and my clients are content with the outcome of today’s hearing. However the injunction remains in force, which means that the Council are still able to apply to commit them to prison again.”

Many in the camp still fear further legal action. Ryan McFee, the creator of the Ark, expressed fears today of a slow dissection of the camp.

“The bit of land that they tried to push a possession order through over there was covering this bit of land as well but what they’re trying to do is block us off little bits at a time and I’ve got a video of a gentleman who came to do an estimate on a permanent fence here. They’re going to put a permanent fence down near the Harris Centre now.”

He went on to say he worried another possession order would be lodged.

“We’re expecting them to come back at us, they’re going to sit back and gather more evidence so they can get another case against us, but they will just keep making a mockery of themselves.”