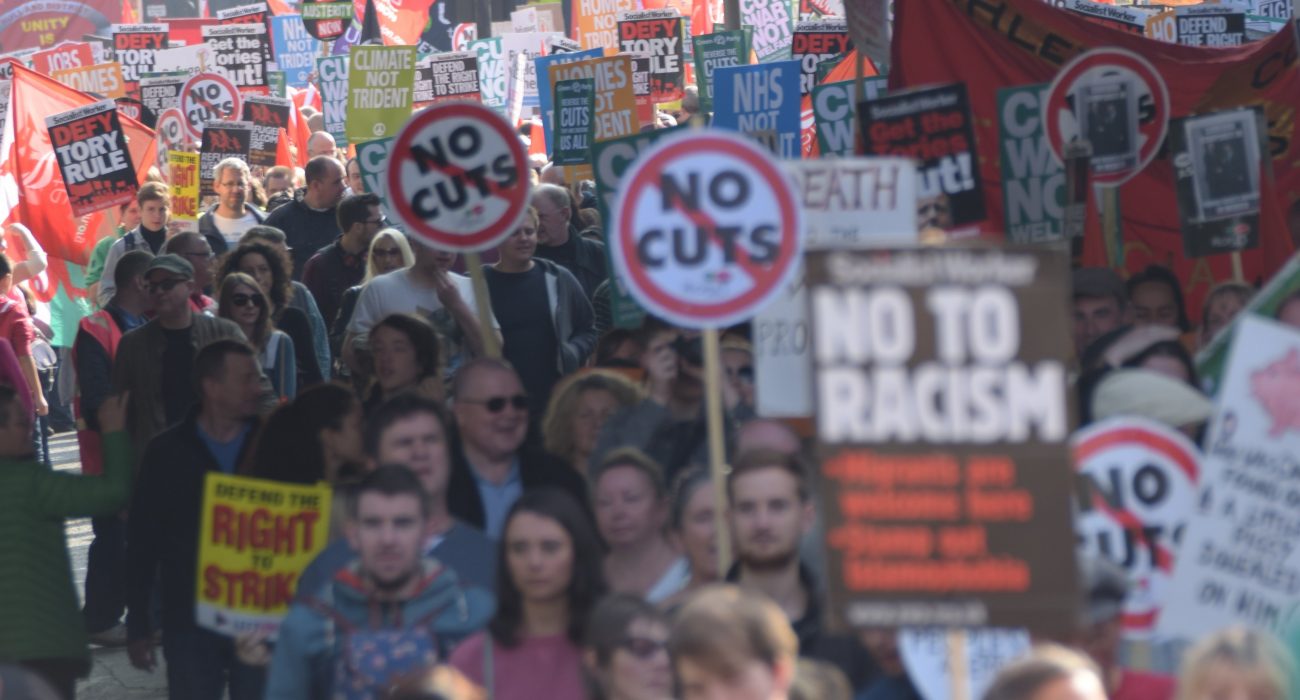 Mob mentality spreads when people take to the street. Photo: The Mancunion

Disturbance at the protest – unacceptable, but inevitable

Last Sunday, tens of thousands of people, young and old, marched through the streets of Manchester in protest of austerity, government cuts, and government policies such as the renewal of Trident.

It was inspiring to see people come together to clearly express their discontent and dissatisfaction, and bring certain important grievances to light, particularly problems that affect the least represented in society.

The unity portrayed by the ‘haves’ standing alongside the ‘have-nots’ was enough to give any cynic some hope that there is another way.

It was even described by one commentator as like a “family day out,” with children coming along with their parents and the march being, on the whole, fairly calm and peaceful.

Unsurprisingly, there were some less savoury moments throughout the day. It’s a credit to the peacefulness of the march that only four arrests were made, but police, journalists, and even Owen Jones received unnecessary abuse from over-zealous protesters.

The news that a young Conservative delegate, in fact a University of Manchester student, took an egg to the forehead was national news within hours. When two Telegraph journalists were spat at by a demonstrator, this also caused outrage.

These actions are condemnable and significantly reduce the credibility of the movement as a whole. However, without in any way excusing them, actions like these are inevitable at such events.

The ability of people to express valid opposition to the actions of government has been reduced steadily over time by those in power, until effectively the only way that remains is united movements like Sunday’s march.

Our broken electoral system, and a tendency for MPs to base their actions in Parliament solely on appealing to a certain bloc of voters, means that those who struggled to have their voice heard in the past now have even less influence. The only formal method of effecting change now is to wait until the next General Election,

The ability to move as a unified front against injustice is the last resort of the disabled, the desperately poor, and other minorities in society. These causes are also picked up by activists including unions, students, and those on the fringes of the political spectrum.

However, as soon as people come together in their thousands, a mob mentality begins to develop. Furthermore, for certain troublemakers, the possibility of causing a ruckus by throwing an egg at a young Tory for example, without being identified, is too tempting.

“Typical,” many will say. “Left-wingers think that they disrupt the democratic process. And say what they want about those who don’t agree with them.” But protest isn’t just a temper tantrum at something not going your way. It’s simply the only way to attract the attention of the country.

People are rightfully angry. No state has a populace who are all content with what’s going on in the upper tiers of power, and this government has made a habit of cutting help to the most vulnerable in society. So when chants such as “Tory scum” begin, I’d imagine that a lot of people are heavily influenced into joining.

When one person breaks ranks, it’s not a surprise that people who have consistently been belittled, ignored, and victimised are sparked into joining them.

The more this recursive action of pressure and reaction occurs, the more an outside viewer looking in sees an indiscriminate mob of shouting, spitting left-wingers.

And these wrongful actions of the few receive the same amount of media attention as the fact that 60,000 turned out onto Manchester’s streets in an attempt to be heard.

When you’re on the receiving end of a protest, the best thing to could hope for is for someone to overstep the line between reasonable and unacceptable. Immediately, you can paint those on the streets as anti-democratic, violent and petty.

But if you’re organising or supporting the protest, then all you can do is hope that people remember that the ultimate goal of your campaign is recognition, and that those who jump at the opportunity for a little public disobedience will stay away.

We need to recognise and uphold the power of the protest, but we also deserve a better method to show dissent than simply waiting until another candidate for local MP comes along.

We need a way of asking for change that doesn’t lead us blindly down the path that will let us easily be tarnished as ideologues just looking to make trouble. Unfortunately, I do recognise the irony inherent in asking for this when I’ve explained that we don’t have it. That’s the Catch-22 of the situation, so all we can do is keep demanding it.