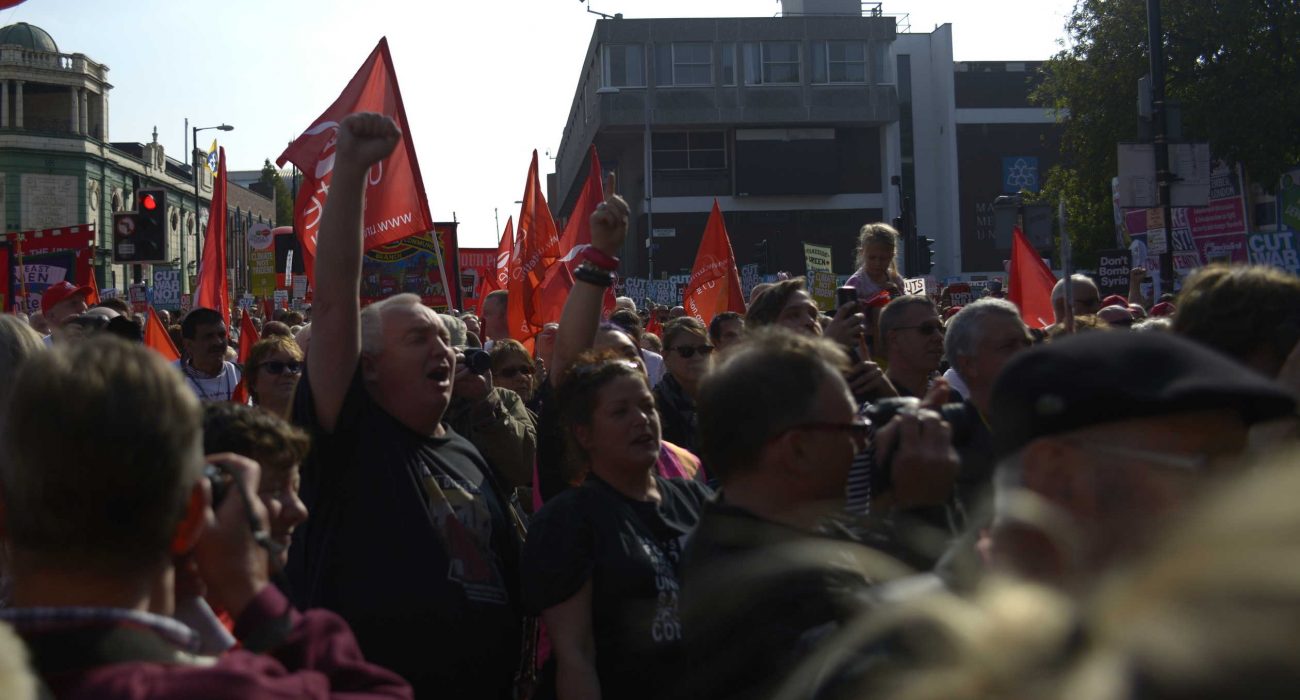 Thousands of people marched from the University to Castlefield in protest at the staging of the Conservative party conference. Photo: The Mancunion

On Sunday 4th of October, at least 60,000 marchers gathered on Oxford Road at All Saints Park and made the three hour walk to and around the conference centre where the Conservative Party Conference was being held.

All the tribes of the left were represented: Steel workers from the mothballed SSI plant in Redcar, pro-cannabis legalisation activists, Stop the War Coalition members, anarchists, Anonymous supporters, a plethora of trade unionists, families, students, and seemingly every other individual with an axe to grind against Dave and the Gang.

I spoke with a few of them to find out why they were there and to see if they thought their actions could have any long-term impact on the country and its political sphere.

Protestors came in all manner of outfits—but porcine-based costumes were incredibly popular. Photo: The Mancunion

Caoimhe studies English Literature and Drama at the University of Manchester and was keen to tell me what her motivations were for being there: “I’m very anti-austerity, and I think that the Tories have such a small mandate to do what they are doing. It’s affecting people’s lives so negatively, and we just need change.

“The fact that they’re holding their conference in Manchester, which is a left-wing area, shows their insensitivity to people here who are living below the poverty line or are affected by tax credit cuts.”

Throughout the day it became clear that people were not just angry with Conservative party policy, but the fact that they chose Manchester as their conference location. This fact seemed to breed resentment across the board, and brought accusations of insensitivity.

Further into the protest, after a rally and the mandatory Billy Bragg songs, I caught up with Izzy and Ellen, also students at the University of Manchester.

Ellen, studying English at the University of Manchester said: “As a student, I find the cuts to education really really scary; not just for our younger siblings and people we know who want to go to university now, but nationally.

“I think the most important thing for young people is education, and a Tory policy that prioritises the 1 per cent means that fewer young people will be able to get an education. That’s what we’re protesting today.”

Ellen and Izzy hoped that taking part would grab the attention of the government. Photo: Daniel Saville

I asked Izzy, who is also studying English, if she thought the march would achieve anything.

“I think it will send a message—whether they listen to the message or not is their issue—but it’s really nice to be with like-minded people. Young people can seem ambivalent, so to see so many students here is amazing.”

It was not, however, just the disaffected youth on the streets of Manchester City Centre, but a real kaleidoscope of people across all ethnicities, areas, and backgrounds. Just before the protest reached Albert Square, Joseph, a part-time construction worker, told me how the Trade Union Bill has brought people back to activism.

“He’s got to create an environment where you might say people who had been sleeping have been awakened—like a sleeping giant—and we are helping to move that forward.”

Joseph is confident that the demonstrations will awaken the ‘sleeping giant’ of the Labour movement. Photo: The Mancunion

There was one notable exception to the list of groups attending the march: The Labour party was not represented as a single entity and instead it fell to local branches or individuals to oppose Conservative austerity policies.

Stella told me: “I’m a member of the Labour party. I wanted to come and fight for Labour as sometimes I don’t think we’re visible. I’m sure a lot of Labour members are here but we don’t arrange ourselves under one banner, like the Greens, so I wanted to be really clear that the Labour party is anti-austerity.”

However, not all of the protesters were out on the streets looking for peaceful political change. Two teenagers wearing Anonymous masks were standing at the edge of the protest and when approached for a comment over why they were protesting, one said: “I came here to fuck over the Tories. They’re looking for class war at the minute—that’s what we came here for—but we can’t find them.”

Members of the Anonymous group feel that the government is spoiling for a fight—and they’re more than happy to oblige. Photo: The Mancunion

Other than the egging of a Conservative student the march remained reasonably peaceful, with only four arrests over the entire day, and one of those arrested charged with drunk and disorderly behaviour.

It seems that we’re not quite at the tipping point of class war. Yet, with many of those out on Sunday hoping for peaceful political change, and an end to tighter regulations of trade unions, the scrapping of tax credits and an end to crippling austerity, class tension is certainly palpable.