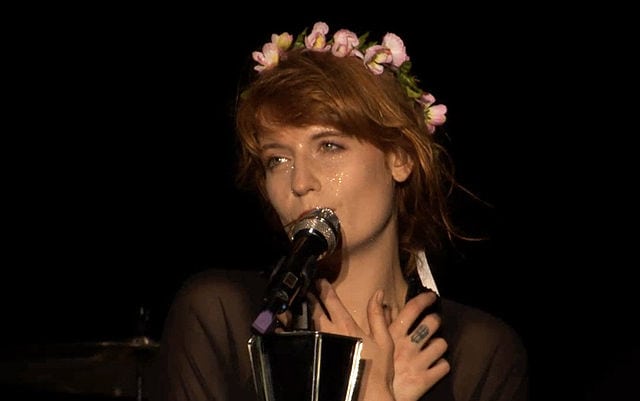 Live: Florence And The Machine

Florence and The Machine came to Manchester last Friday for their seventh date of the How Big Tour at The Manchester Arena. The London-based band were supported by The Staves—a folk-rock trio of sisters. Despite the venue being a little too cavernous for their mellow sound, they provided the perfect aperitif of vocal harmony and soft guitar melodies to wet the bustling crowd’s appetite for the main event. Shortly after, the iconic auburn hair fluttered as Florence Welch bounded up to the stage to assume her spot behind the mic in pure white flared pants, a mustard blouse and barefoot—you’d have thought she’d learnt a lesson from Coachella?!

Behind her new-found, understated dress sense of a business woman, Florence Welch is an eccentric character to say the least. Throughout most of her performance, she was leaping and pirouetting across the stage like a ballerina on a caffeine high. There were some clichés, like a song being dedicated to the city, which the cynic in me believed was also dedicated to Sheffield the week before. Regardless, she built a near intimate rapport with her audience. One stand-out moment was during ‘Rabbit Heart’ when, like a child running in the playground, Florence sprinted through the crowd to the first tier of the arena with a panicking security guard left in her wake.

Florence’s operatic voice filled every available space of the packed arena. They opened with the dark Ceremonials track, ‘What The Water Gave Me’, which may have been a little bleak, but built to a bombastic sound. By the third track, ‘Shake It Off’, she asked, in her surprisingly soft speaking voice, that the exuberant crowd be her choir. We obliged, singing and dancing as the show rattled on with consistent energy.

A touch of respite was welcome when Florence performed an acoustic rendition of ‘Cosmic Love’. After 80 minutes, the main set came to a finale with the ‘The Dog Days Are Over’ which, at Florence’s command, saw the crowd become a sea of waving garments of clothing and semi-naked fans. Of course an encore is pretty much mandatory at such an arena gig and a couple of softer songs would have been an ideal warm-down. But of course not! It started with a punch from ‘What Kind Of Man’ and then ended with the thumping, rousing ‘Drumming Song’, which gave everyone the adrenaline to carry on the party… or rush for the last train home.

The Machine are dynamic and musically mesmeric, while Florence remains one of the most enchanting performers of the 21st Century.