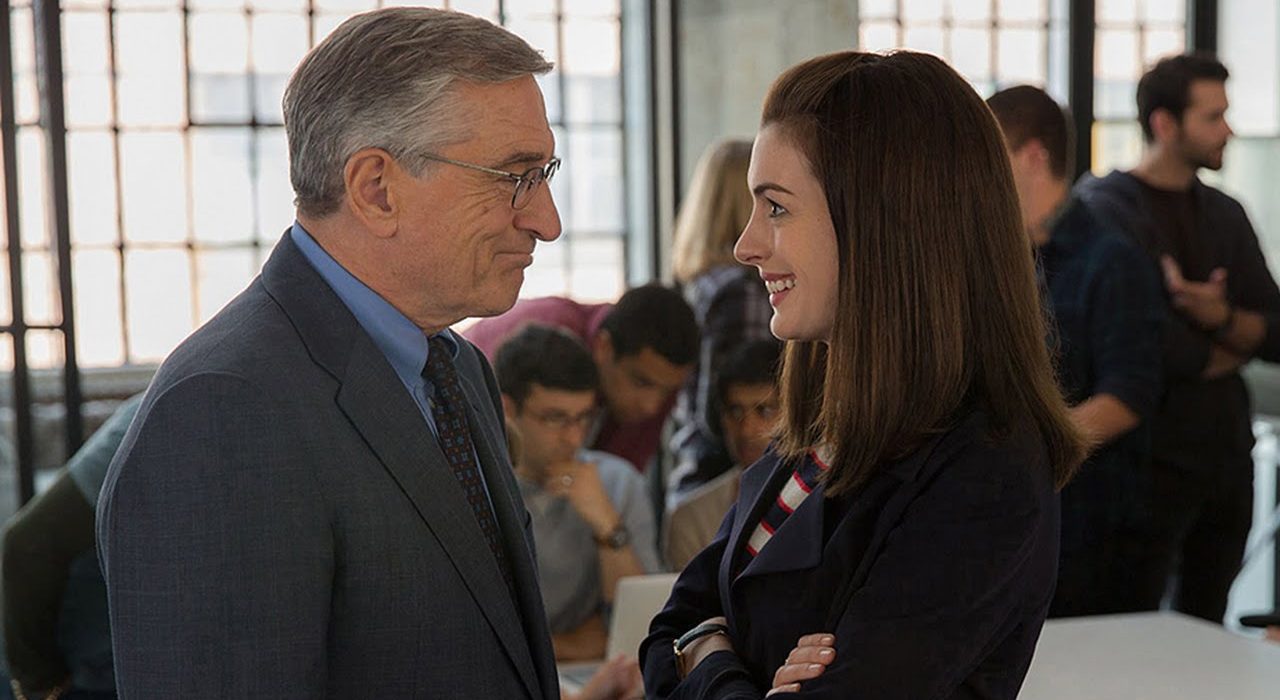 Normally, when an actor walks out on a press junket it forebodes just one thing—the film in question must be below par. The actor most recent to this shameful walk away from the media, is none other than Robert De Niro. His interview with the RadioTimes shone some coverage onto his latest release, The Intern. Written and directed by Nancy Meyers, this fluffy comedy flick follows De Niro’s Ben Whittaker and Anne Hathaway’s Jules Ostin on their unlikely road to friendship. There is, however, a slight plot twist—The Intern is surprisingly not that bad.

Opening in the picturesque Central Park with De Niro’s Ben participating in yoga classes, the film is instantly upbeat on life—even though Ben is a widower. He seeks a fresh challenge after growing tired of the mundane and depressing nature of being retired. Noticing an advert at his local shop for a senior citizen internship at an online fashion start up company run by Hathaway’s Jules, he decides to give life a new approach and applies instantly. De Niro goes through the rigorous interview system to comical affect—suited and booted with the most suave suits you will see this year—maybe Bond will claim this mantle soon.

Numerous employees of the firm crack jokes about his age and hearing ability, which, like the gentleman the he is, he takes with little offence. No surprises when he is given the job and is assigned to the CEO of the company, Jules. At a similar time in the narrative, Hathaway’s character is introduced as liberating and sentimental; she is the epitome of a strong modern day woman. Her proactiveness extends to riding a bike around the office to maintain intangible energy throughout her manic day. Their development of a mutual relationship follows a fairly stereotypical plot, but what does unfold on screen is loving and caring.

Meyers enables the script, written by herself, to take on feminist and anti-ageist themes. The whole premise of De Niro’s character is centred around the rejection of ageist notions towards senior citizens being lesser than those who are below the pension line. Her perspective adopted is one of wealth and luxury—a reflection of the perfect American life; realised in her 2006 film, The Holiday, as well as this release, too. Fundamentally, the film doesn’t pretend to be anything else, unlike a lot of Hollywood films in this modern day and age. A refreshing approach is adopted where the two leads do not hook up—their portrayal of mutual respect is verisimilitude.

There are clear messages in the contemporary world that surround us in Meyer’s piece, but they never develop into any serious commentary or statements of praise or criticism—a missed opportunity in my book. As with the director’s previous work, the main character development takes place with the leads; no other actors really get a look in. One or two subplots run beneath the belly of the overarching story, but they don’t add any substantial flesh and bone to the latter. A fundamental story about the ability of the human race to endure, adore and respect one another, The Intern is great to watch on a winter’s evening, to retreat from the arctic weather, with a cup of your favourite hot beverage, and a cosy blanket.

Not bad but neither amazing, it is worth your time to gaze in awe at the life of these well-lived characters—plus De Niro, obviously.