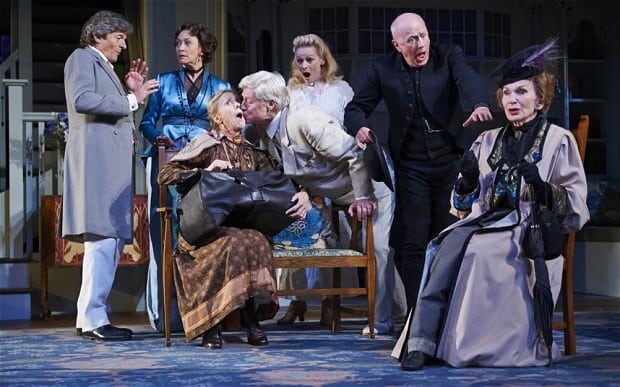 Review: The Importance of Being Earnest

One of the big issues that seems to face many theatre companies at the present, is the desire to keep old classics fresh, and to present them in a novel way. The Lowry’s current production of ‘The Importance of Being Earnest’ is a decent attempt at this. This production seeks a departure from the somewhat clichéd performances by introducing the play in illusory dress rehearsal—a play within a play. This enables the genius of the comedic content written by Oscar Wilde to be enjoyed along with the actors, as they argue over end-of-act winks and other issues. Still, though, I lamented the addition of the material slightly. I did not feel that the added material was of sufficient quality to render the experience better overall. While there was originality, I felt that the changes left me less able to immerse myself within the world of the play.

The story focuses on two friends, Jack Worthing (Martin Jarvis), and Algernon Moncrief (Nigel Havers), who both use an invented character in order to escape from their respective spheres and social responsibilities. For country dweller Jack, his wicked (and fallacious) brother, Ernest, provides regular excuses to jolly off into the city. Jack’s engagement to Gwendolen is not acceptable to her mother, the ‘gorgon’ Lady Bracknell (Sian Phillips), because Jack is a foundling. The engagement will remain unacceptable unless he can “’produce at any rate one parent, of either sex, before the season is quite over,’.

The ‘play within a play’ aspect was thoughtfully done, and the concept of watching a rehearsal of an amateur production was quite convincing. The stage design, in particular, enforced this concept, because the room did not change in-between acts, but rather the furniture was moved around. This initially came as a disappointment, but I warmed to it since it is firmly grounded in the context of this modified version. Additionally, the use of the older actors to play these young characters worked well. When Jarvis declared – in an almost mocking way – that his character was 29 years of age, the house erupted with laughter.

The production was, however, a little too serious for what is clearly supposed to be a mockery of the attitudes of the aristocracy of Wilde’s time. Many of the lines were not delivered to maximum comical effect. Compare this production, for example, to the recent London production with David Suchet as Lady Bracknell, and it is hard to come to the conclusion that this one is superior. The lack of affirming comedy was perhaps due to below-par performances in some places; partly due, perhaps, to the calibre of the actors being over-specified.

Lucy Bailey’s ‘The Importance of Being Earnest’ continues to tour the UK until the end of November, with added dates to be announced. For further information, see here.