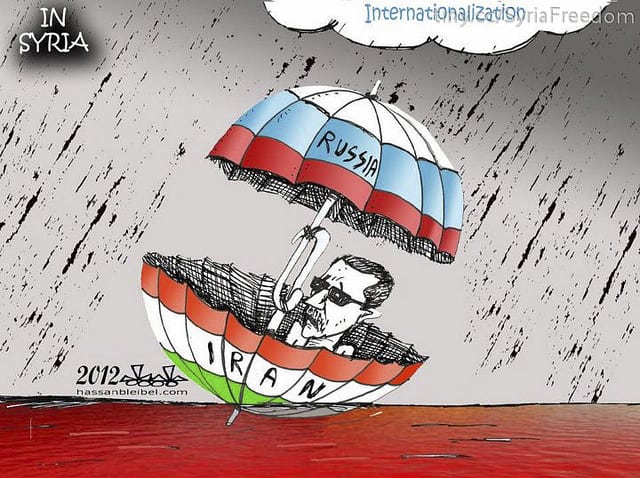 Russia’s impact in the war in the Middle East

If you cast your mind back to the haughty days of 2011, there are a few world events that immediately come to mind. The wave of uprisings against previously invincible Middle Eastern regimes was in full swing: Tunisia, Egypt, Yemen and—with a little help from the British military—Libya all witnessed rapid, violent regime changes that unseated despots febrile with power.

Suddenly, they were being dragged from their palaces and hauled before the gallows in what could only be described as a very vindictive form of justice. Meanwhile, in the corridors of power, the leaders of the Western world could hardly believe their luck. Finally, it seemed that there would be no more rogue states, a few less bloodthirsty warlords, and maybe a return to sanity for a region that had been ravaged by instability since time immemorial.

When Syria began to show signs of uprising, the west rejoiced, the call for the international community to supply arms and support for the rebels was almost deafening.

Then, along came Russia.

While America and Britain had been watching the events in the Middle East with jubilation, the Russian mood was decidedly sombre. Libya and Egypt had been large buyers of Russian arms, and their opposition to western interference had been a key aspect of Putin’s foreign policy. And so, when the US and the UK began discussions about supplying aid to the rebels fighting the Syrian government, Russia began implementing measures to preserve its dwindling list of friends, and promised to veto any attempt to interfere in Syria through the UN.

President Obama could only simmer in frustration and supply small amounts of arms to the Syrians whom he supported, while Putin sat back and did the same, and it looked like the Syrian civil war would devolve into another nation of superpower-sponsored warlords. But of course, the story of Syria took yet another twist with the rise of IS—an international, ultra-violent, radical militia, bolstered with a new generation of radicalised European and American fighters, and armed with captured US weapons.

In the Russian media, Obama has been derided for his debating and posturing, while Putin has been lauded for co-ordinating with both Iraq and Iran to launch missiles over their skies towards Syria. In short, Putin has portrayed himself as the man who acts, who can be tough on terrorism and who can solve problems.

But all is not quite as it seems.

The Russian airstrikes, while undoubtedly effective against IS, have also injured alarming numbers of civilians; the cruise missiles launched from the Caspian Sea have not only been hitting IS targets, but also wreaking havoc upon the free Syrian army and any other rebels still fighting against Assad’s government. While Putin laps up the headlines with his grandstanding, the Russian army is moving massive battalions of troops and equipment to bolster Assad’s forces, and is rumoured to be deploying large numbers of special forces into Syria to support Assad’s army.

Russia is doing far more than fighting Terrorism. Russia is crushing the Syrian insurrection, and by the way things are going, it is clear that preventing collateral damage is not a priority for the Russian military.

What does it all mean for the future of Syria? There’s no way to be sure, but there are some outcomes that seem probable. In terms of IS, the combination of airstrikes and a Russian-equipped Syrian military will certainly give them problems, but as we saw in Iraq, air power alone will simply drive the IS militia into hiding or across borders where they can’t be followed.

To cause lasting damage to the would-be Caliphate would require a multinational response across several borders in the region. Russia has signalled that it is willing to work with a coalition to defeat IS, but with all other potential allies stating the removal of president Assad from power as a condition for support (something Russia is unlikely to compromise on), an alliance seems unlikely as Russia seeks to protect its Mediterranean naval base in Syria and the client state itself.

The Russian intervention is both a blessing and a curse for different Syrian groups. On one side, it holds the promise of a possible end to the fighting and fanatical insanity that has plagued their country for the last three years, plus some stability in Assad’s territory; on the other side, that peace involves the continuing reign of Bashar al-Assad, a dictator who has committed war crimes against his own people in a desperate bid to cling to power.