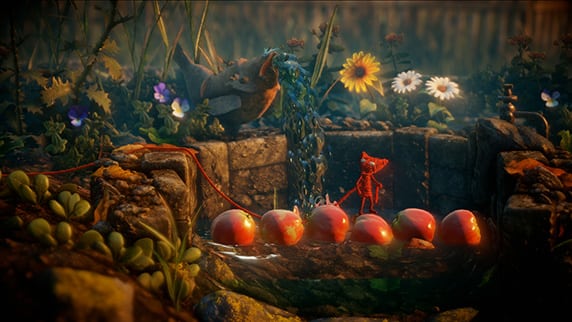 If you told me this time last year that one of the games I would be the most hyped for in 2015 would be about a ball of string in a field, I would have questioned whether you were feeling alright. But there I was, intently watching a developer presentation on the EA stage about Unravel and the only thing stopping me from jumping to grab the free shirts they were throwing out was the fact I was standing in the queue to play it.

Unravel is a physics based game where you play as Yarny, an anthropomorphic ball of string that tries to traverse the world around him using his string to climb, bounce off and manipulate the environment.

Initially starting off at an elderly woman’s house, you travel through distant lands using nothing but your twine, and with distant lands comes different puzzles. You’ll find yourself navigating a small pond one minute and then the next having to deal with radioactive waste.

However, you have to be frugal with your yarn as if you run out you can’t progress, and have to back-pedal to try again. Solutions in this game are always quite novel and require a degree of lateral thinking before the sudden “Eureka!” moment hits.

The creative director on Unravel, Martin Sahlin, made a prototype Yarny doll while on holiday with his children and took pictures of him in different scenarios, which speaks volumes for the amount of heart and charm this game has.

When Sahlin speaks about the game it is always with a strong passion for the project and a love for what he is doing. His natural nervousness on stage and seeing him discussing how he wanted the game to feel and how fun he could make it was more effective than any focus group or rehashed old IP could ever be. I for one cannot wait for this game to come out in 2016.