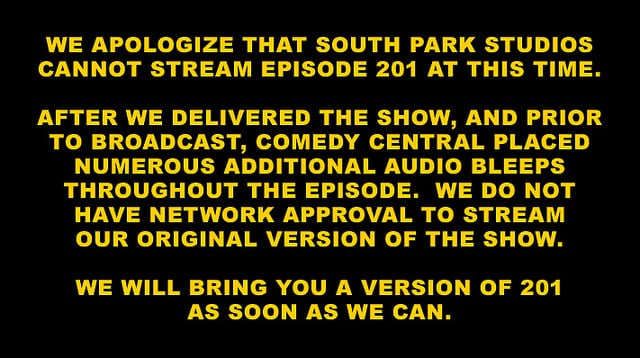 Artistic censorship exists in the same universe as oppressive governments, graphic depictions of a woman’s body, and all other things young people enthusiastically champion against. If asked whether art should ever be edited for public display, the answer will almost always speak for how receptive to new ideas someone is and—because millennials are seen as open-minded—the consensus is usually no.

Paradoxically, the same age group of 12 – 34-year-olds also has had a staunchly expurgating attitude towards the art that was welcomed by their parents. In the form of political correctness, comedians are being pushed to construct their jokes to either fit a certain configuration that repeat (without creativity) multicultural, gender equal, LGBT, handicapped sensitivities or resort to aeroplane food humor. Narrow analysis that fuel raging demands for apologies discourages comedians to comment on deep-seated injustices and society’s unconscious ideologies. As a result, it is my opinion that comedic censorship by well-meaning social activists obstruct the free flow of ideas in society.

This past June, veteran comedian Jerry Seinfeld expressed how excessive concern over jokes covering minority groups bothered him. Almost instantaneously, liberal media outlets like Salon and The Huffington Post defended the idea of a PC police, denying the harms. Most (if not all) lambasted Seinfeld for not being able to adapt to a changing society where people are more aware of discrimination. He doesn’t pander to an audience outside of his fan base, he stated his opinion in response to a question, and is a successful straight white man—that’s hardly grounds for lumping him with sectarian dogmatists. In the fight for equality, some have demonized all straight white men because many offenders fit the criteria. Energy spent on that however, dilutes the equality movement and takes focus away from the original idea.

Millennials care a great deal about improving the likelihood of an equal society. That said, to say that college students today are more proficient in the issues of race and gender politics is to forget the nationwide protests of young people against the invasion of Cambodia and the Vietnam War. When Seinfeld was in college, counterculture was alive and progressing the rights of black people, Hispanics, gays, and women. Young people have an ear for discrimination but it’s on the path that was set by the previous generation.

Jokes are not the same as opinions. They bear some resemblance to what the comedian believes, but because it is a performance, full explanations aren’t provided. When people enter a comedy club or click on a link, there is an understanding that the only intention is to make them laugh. A misguided perception of laughter as denoting triviality however, leads some people to assume that the figure behind the microphone is facetiously treating the subject at hand with disrespect.

Beyond this completely one-dimensional interpretation of laughter, is a realization that it’s actually a way to heal ourselves. Take away the factor of laughing, and comedy will be easier to compare to a film or a sculpture. If art were to be treated like comedy today, paintings would be hidden away and films would have much stricter censorship rules. There have been some comparatively gritty pieces produced by both mediums, but like comedy, no painting or film fully represent the artist’s opinion. Yet still, the majority of people will defend the director before the comedian.

Comedy is more than about making people laugh, it is also about comment. The people that make us clutch our stomachs in good liberating pain will also occasionally make us feel uncomfortable. That’s vitally important. In doing so, they’re holding a mirror up to us, forcing us to confront the bitter realities that we prefer to ignore. Greg Giraldo, Harvard Law graduate and comic at Comedy Central explains, “a lot of racially charged shit happens here in New York City. Yet mainstream culture likes to pretend that race issues don’t exist. It’s the sad reality of our culture. Unfiltered honest talking on race is rare, but comics are comfortable with race. Comics are honest. Nothing is off-limits if handled properly.”

By being limited in what can be said to avoid controversy or backlash, comics will shy away from fringe material like race relations and gun deaths. Without the release of laughter, hostility will continue within already tense relations. Good-intentioned restrictiveness produces a strained attitude that perpetuates an unchanged situation with regard towards heated topics. When advocates subdue comics, it also includes those in minority groups. Limited in their jokes about the systematic injustices they face, this leaves said injustices without coverage from the human perspective, with all the heartless coverage of 24 hour news.

Our collective lexicon absolutely has an influence on humanity’s narrative. Comedic utilisations allow us to laugh at tragedies, events that are in no way funny, and feel a little bit empowered towards the things that hurt us. When interest groups call for an apology, they are calling for a comic’s head and encouraging self-censorship. Unless pressured by scrolls of Twitter accounts to say sorry, it’s unlikely that a targeted comic will budge.

Once the admonishments pile and reach their places of work however, they will have to issue a statement of regret. Often neither employee nor employer truly agrees with the pitchforks and torches, but to keep their jobs they abide. This is where it gets frightening. Witnessing this public reprimanding of their friends and co-workers, comedians will self-censor their material so that they don’t get the fifty lashes.

Notable comedian Chris Rock attests, “if you think you don’t have room to make mistakes, it’s going to lead to safer, gooier stand-up. You can’t think the thoughts you want to think if you think you’re being watched.” Being a generation that prides itself on progressive convictions, we would be remiss to resemble any part of 1984’s most terrifying omens. To be clear, it is not the voicing of concern that causes this, but rather the punishing—by way of cutting off income—that leads to ideologically-justified bowdlerism.

Political correctness—the scrupulous desire to have everyone on equal footing, is especially concentrated in university campuses. Students don’t immediately set out to suppress, but heightened awareness caused by monitoring peers and exclusion anxiety creates a neo-Puritanical environment that self-enforces a dangerous conformity. Universities are supposed to be a marketplace of ideas, where minds can blossom and come into contact with other viewpoints. And they still can, we just have to remember that art imitates life. If the image we see isn’t pretty, it is because it is reflecting life. Concentrate on fixing life—don’t blame the art.