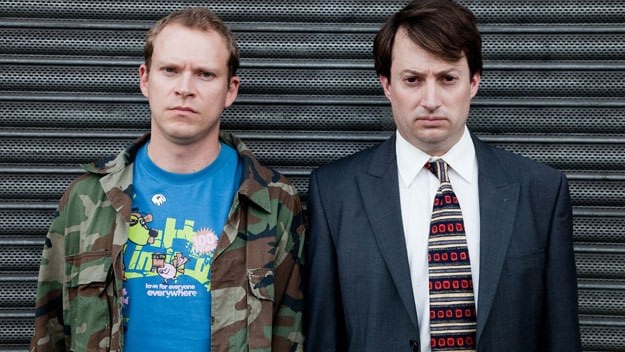 Is there a more original and ingenious British sitcom of the 21st century than Peep Show? If there is, I’m yet to discover it. After eight series documenting the questionable life decisions, self-deprecation and failed romantic escapades of flatmates Mark Corrigan and Jeremy Usborne, much-loved double act David Mitchell and Robert Webb have finally come together once more to reprise their roles in a final series of the hit Channel 4 show. Told through the unique point-of-view camera perspective, which has become one of the show’s most iconic features, Peep Show, for those who haven’t had the pleasure (or displeasure) of watching, became a fast favourite amongst critics and fans alike after it premiered in 2003.

It’s clear to see from the haphazard and often cringe-inducing attempts by Mark and Jez to survive their everyday lives that a great deal of Peep Show’s success stems from the starkly hilarious contrast between the pair’s attitudes to, well, everything. Whilst Mark struggles to win the affections of his colleague Sophie whilst battling with his vapid office day job, Jeremy lives a life of frivolity, idleness and contributes very little: “As I’ve told you before Mark, re: doing a job, because of my creativity it’s kind of abuse.” In countless Peep Show-related discussions I’ve been involved in, the question of whether I’m “more Mark or Jez” has never failed to crop up. Indeed, the relatable quality of the protagonists’ deeply flawed but lovable personalities plays a huge part in audiences’ enthusiasm towards the show.

With an equally amusing supporting cast, most notably Matt King as Jeremy’s friend Super Hans, the “crack-addled maniac,” each episode is equally quotable and rewatchable. Peep Show is arguably one of the most consistent sitcoms produced in recent years, with no particular series surpassing another. Its humour remains relentlessly dry, witty and biting, thanks to the exceptional writing of creators Sam Bain and Jesse Armstrong. The uncomfortable, often humiliating scenarios the duo find themselves in make for some unbearable second-hand embarrassment at times, a personal favourite being Series seven’s The Nether Zone, in which Mark and Jeremy find themselves trapped in the airlock between Jeremy’s girlfriend’s flat and external door. It’s truly a testament to the show’s incomparable dialogue that such simple situations can evoke such hysteria among audiences. If ever a show deserved the description ‘laugh out loud’, it’s Peep Show.

Dark, sarcastic and oddly comforting, Peep Show is undeniably one of Britain’s finest comedic exports. It greets you like an old friend when you’re feeling a little down on life, and is a must-see for those who love self-deprecating humour. After the cliffhanger ending of series eight, the show’s final outing seems both promising and intriguing. Trailers for the series feature the welcome return of some of the show’s best-loved characters, and it’s clear to see from the social media frenzy generated that Peep Show is highly-placed on people’s collective TV radar. The shared paranoia, anxiety and often bizarre thoughts of Mark and Jeremy is endlessly painful and entertaining in equal measures—a combination that is absolutely instrumental to the show’s success; so whether you’re a new or old fan, be sure to tune in for the return of the ‘El Dude Brothers’ on Channel 4 throughout November.