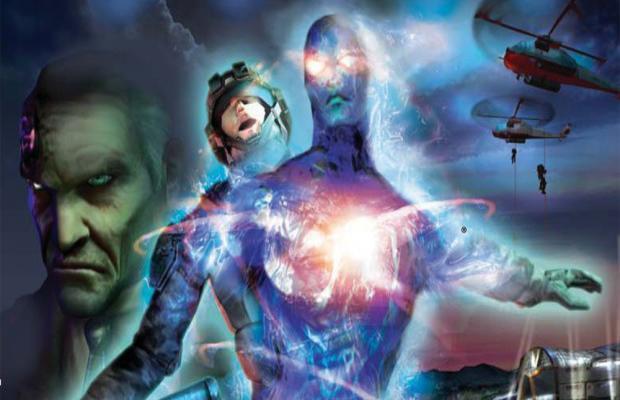 In the video game industry at the moment everyone, both fans and video game companies, are used to Nintendo being the kid-friendly company who likes to do something different from everyone else, with crazy gimmicks in exchange for console power.

However, people often forget that back in the early 2000s, the Nintendo Gamecube was the strongest system of its generation with a lot of major 3rd party titles like Resident Evil 4 and a lot of serious, adult titles like Eternal Darkness, Call of Duty: Finest Hour, Killer7 and Metal Gear Solid: Twin Snakes, to name a few. One of the most underrated of these titles is an exclusive first-person shooter called Geist which deals with death, nudity, and a lot of religious tones—and this is a game published by Nintendo themselves.

Geist came out about half way through the GameCube’s life cycle and was massive surprise for fans at E3 2002. It was not exactly anything they had ever seen Nintendo do before, but many were excited. Geist is primarily a first-person shooter, however it would not be a Nintendo game with out some kind of twist, and Nintendo definitely had a spooky gameplay mechanic that made it stand out. In most first-person shooters, the player can run around and change weapons by picking up other guns. Not in Geist. Instead, if the games title did not given it away already, you play as a ghost called John Reimi, and you have to possess people in order to survive.

The game has both a multiplayer aspect and a single player campaign. Both are fun but the multiplayer starts off rather barren until you unlock stuff for it by finding collectibles in the single player. The single player is where the game really shines by combining first-person action segments with puzzle elements. As a ghost you can possess people in order to slip through areas undetected. If you need to get through a door then just possess someone with the right credentials and walk on through; however, if it was that simple then the game would not be as fun as it is.

As the game explains it, people can only be possessed when they are vulnerable and they get vulnerable when they are scared. So, it is up to you as the player to make them scared and you do this by playing the poltergeist. You can possess objects and make them do all kinds of strange things from moving bins on their own to literally jumping out of a TV to scare its viewers. This is Geist’s greatest element, and I cannot stress enough how much fun and how creative some of these puzzles can be.

Unfortunately, while one of the game’s major aspects is fantastic, its other major gameplay style is… mediocre. The first-person shooter sections of the game are not terrible by any means, but there is nothing about them the particularly stands out. The controls are a bit clunky and you never have to worry about ammo, so it is just a matter of shooting everyone while keeping your host alive. Sometimes these sections throw in elements that make them really interesting, like possessing grenades that are in mid-throw and rolling them back to their original owners, or hiding your host body somewhere so you can possess a Gatling gun on the other side of the room and use that to mow down your unsuspecting enemies.

It is just a shame that these segments are so far and few between. Specifically, I wish the bosses used this a bit more because, except for a very few, they all just rely on shooting and hiding. Compared to more modern first-person shooter games it certainly does not feel anywhere near as polished. Even for games from its time it was a bit clunky, but it certainly was not unplayable.

Geist is a game that went largely unnoticed at the time of its release despite all the initial hype behind it. It is likely that the lack of success in titles like this is what drove Nintendo to move a bit further away from the more realistic style and stick to a more stylised one for future titles. This is a shame really because Geist was an incredibly fun game and one that I hope Nintendo thinks about making a sequel to someday.

With the lack of GameCube games on the Wii U virtual console, the only way you are going to be able to play this game is by owning a disc of it and playing it on the original system (or the Wii). Thankfully the game is not too expensive (I got my copy for about £10) and it is honestly worth it. Geist entertained me more than I expected. It was nothing groundbreaking, but what was new felt really fresh and enjoyable, and I think more people should check it out.