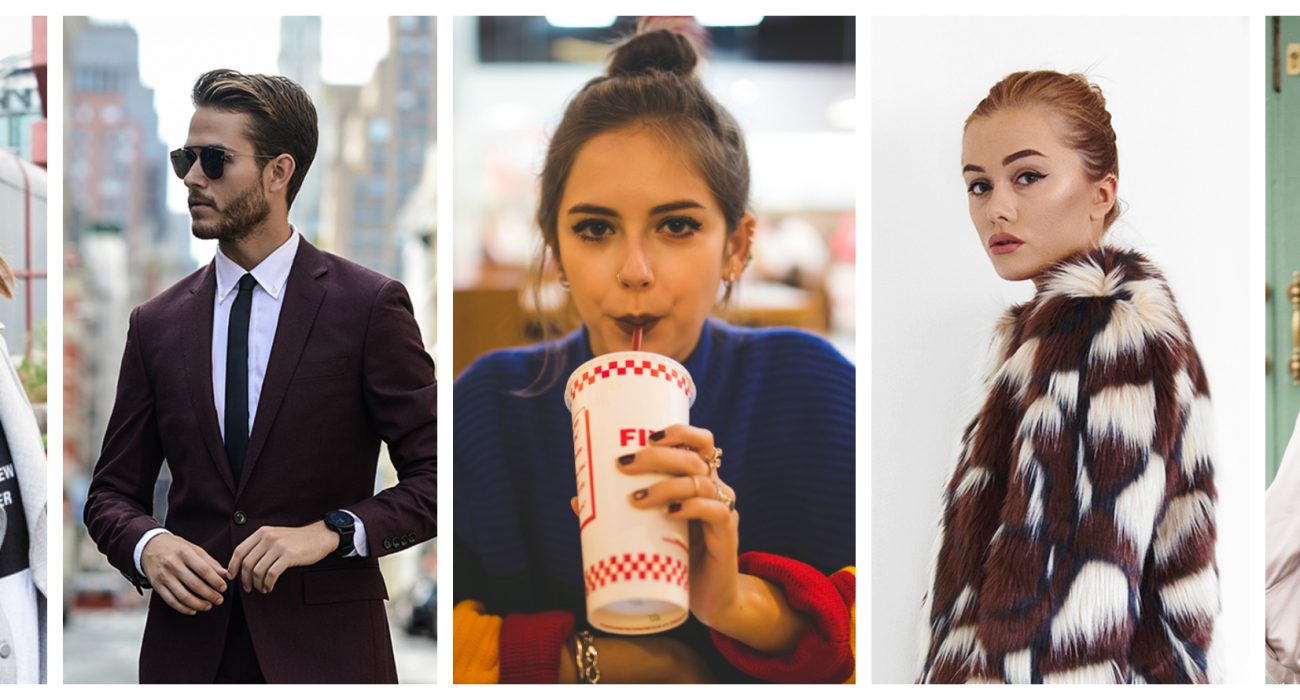 Lily started her blog as a student at Birmingham City University and now, six years down the line, it is her full-time career. Posting a mixture of fashion, beauty, lifestyle and advice articles, she also regularly uploads to her YouTube channel where she posts all of the above, alongside weekly ‘vlogs’ (which by the way are some of my favourites). Alongside ViviannaDoesMakeup, another one to check out, they post a monthly Beauty Chat video which is not only hilarious but also really useful for tips and tricks. Lily nails that minimalistic chic look, with a casual vibe thrown in too. With her always oh-so-amazing makeup looks and an Instagram feed epitomising what all ‘instadreams’ are made of, it’s hard to see what’s not to love.

With neither a pocket square nor a shoelace out of place, 24-year-old Adam Gallagher, is THE menswear and travel blogger. Adam’s signature pieces are his sleek and tailored suits—looks from brands ranging from the high-end (Dior) to the high street (Topman) fill his blog and Instagram profile. With one of his more unconventional claims to fame being erroneously identified as the grown-up ‘Peter Pan’ from the eponymously titled 2003 movie; whether dressed up or down and from the ‘FROW’ to the beach, Adam never fails to delight his male and female fans alike with beautifully lit and edited images captured all over the world. As the patriarchal denizen of his esteemed site ‘I AM GALLA’, Adam also sports some of what I believe to be the best hair in the blogosphere.

Jessie stands out in any blogging line-up.  She maintains her popular YouTube channel whilst studying full-time at Edinburgh University but this juggling act does not force her to compromise on quality.  In fact, the easy-going style she emanates is like a breath of fresh air amongst the sugar-coated, fairy-tale lives that some bloggers communicate.  Nestled in between her meticulously produced fashion and makeup videos, you will find ‘vlogs’ in which she might discuss the broken boiler in her flat, last night’s outing at the Union, or the takeaway pizza she’s about to order. Super studenty things.  Jessie’s casual and effortless style has grunge overtones and includes lots of vintage pieces, making her a go-to for shopping recommendations that won’t necessarily destroy your student loan. One to watch!

I couldn’t be more excited to share my blogger spirit animal: Charlotte Martin. I have developed something of a cult follower’s love for her Twitter account, and would urge everyone to do the same. She describes herself as assistant stylist, fashion graduate, ‘token geordie’, and ‘collector of bad haircuts’. Her style is often an eclectic mix (sportswear teamed with faux fur?) and she regularly posts photos of the times her hair has aimed for Debbie Harry but turned into Rod Stewart. Her Twitter is informed by a dry cocktail of icons, such as Paris Hilton photographed at her trashy best, Cher, and Charlie Brooker. Moreover, she calls Corbyn ‘Jeremy Corbae’. What’s not to love? Some of her best pithy quotes include: “True Mark Corrigan moment as someone sat on the fringe of my jacket but I waited too long until socially acceptable to notify her”; “mood: buffering”; and “Vloggers are essentially children’s TV presenters on acid, aren’t they?”

The eponymous creator of this YouTube channel and blog, formerly known as Beauty Crush, has a rightful place in any blogger shortlist. She is pretty prolific with her creative and well-thought-out content, and her ambition beyond the network of social media has led her to co-found her own clothing line Novem and Knight, which is all about building on essential and understated wardrobe basics, and making the pieces your own. Sammi’s blog goes further than fashion and beauty topics, as she also tackles important issues for young women like body image and domestic violence. She takes her position as a role model seriously and aims to confront these difficult subjects through helpful, approachable videos, giving them the media attention they deserve. I’m a big fan!

Sustainability and plus-size fashion: In conversation with Jenny Marie